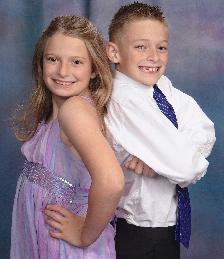 Let me introduce you to my babies, Karlee and Maximus. Karlee was has always been my "healthy child." Maximus, on the other hand, was sick since he was 15-18 months old. Maximus has a severe history of chronic sinusitis, growth of pseudomonas, and many unknown sicknesses. In and out of many hospitals and specialty doctors offices, Max underwent massive testing to determine what was "wrong" with him. In 2008, genetic testing revealed that he was a carrier of one CF mutation. Doctors did not label him, nor did they place him on any protocol. Karlee, Maximus, and I moved to S. Nevada in 2011; both children were living a healthy and happy life. They were involved in Scouts and Sports; adapting well to our new home!

During 2013 Maximus was beginning to show signs of being sick again. He would develop Strep or Tonsillitis on a bi-monthly basis. Doctors in Vegas, felt the best solution would be to remove his tonsils. After recovering from his surgery, Maximus would develop mysterious fevers. We went to the ENT, Pediatrician, Walk-in Clinic, and NO ONE had an answer or suggestion. One Wednesday night, Maximus spiked a 106 fever; we went straight to the hospital; turns out he had pneumonia. They treated him with IV meds and steroids.  Days later, Maximus began to have more difficulty breathing; we went to the pediatrician, who then referred us to Dr. Nakamura, THE CF Doc in Vegas! On June 5, 2014, Maximus was formally diagnosed with Cystic Fibrosis, his lung function was at 62%. Max was placed on the full protocol for CF, which meant he was going to take 15-18 Pancreatic Enzymes, 20 minutes-2 times a day on the Vest System (replaced manual percussions that help loosen the thick, sticky mucus in the lungs), 3 breathing treatments 2-3 per day, mega dose of Vitamin's that CF patients are deficient in. In July, his culture from his lungs came back positive for 2 CF bacterias. August 1, 2014, Maximus went to the PICU to have his 1st PICC line installed. Maximus and I learned how to administer IV meds six times a day, for 21 days. Having the PICC line meant that Max would be limited on physical activity and what he could do throughout the remainder of his summer days! After the 21 days, Maximus was placed on another breathing treatment that he will be on for life; this one is a nebulized antibiotics that will hopefully prevent him from developing the same bacterias that can be fatal to CF patients.

During our September visit to our CF Clinic, Maximus had great news; he gain 28 lbs, grew 2.5 inches, his lung function was the highest it had ever been, 98%! Maximus was doing AMAZING! At this visit, I asked the Dr. to test Karlee, his sister, to see if she was a carrier.

On December 19, 2014, I missed a call from "our CF nurse." Then a text came through, "Please call me ASAP."  I was at work. I got another teacher to cover my class so I could call. Every thought was racing through my mind, mainly worried that Maximus had another positive culture for CF bacterias. I spoke with our Nurse and she said "Karlee's genetic results came back...(pause) She has both mutations, the same as her brother." Huh, WHAT, I cant hear, let me call back from another phone. My thought was how on Earth, shes healthy. I called back from a land line to only hear the same words again, "she has CF too!" OMG, I was shaking, crying, angry...I couldn't express my thoughts. The CF Dr and Nurse said, she has both mutations, but she is probably asymptomatic.

Karlee now had her turn with Dr. Nakamura. Karlee did her first lung function test, PFT, her lung function was 73%. I began to cry. After many discussions about Karlee's background, she had a few signs, but nothing major. Karlee was being placed on the full CF protocol of treatments, just like Maximus. She began to do 2 treatments on the Vest System 20 minutes a day, 2 breathing treatments twice a day, Pancreatic Enzymes, vitamins, and a round of steroids. At Karlee's 2 week check up, her lung function had only reached 79%. Karlee was placed on another steriod inhaler that would hopefully help her functions return to "normal" numbers.

Today, Karlee and Maximus are closer than ever. The little brother, taught Karlee how  to do her Vest, breathing treatments, and try to teacher her how to swallow pills. Life is fulled with surprises. No matter what they are, my babies are a blessing to me.