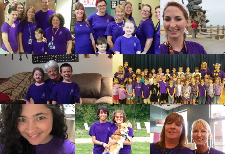 This is the 3rd year the Roeseler Family and Friends 'J' Walkers are participating as a National Team in honor of my two sons Tanner James and Caleb Jeffrey!  We are so excited about our 3rd year and I can't wait to see what is in store for us.

Here is a little insight into our story:  In May of 2007 my first son, Tanner James, was born.  The CF Foundation in Slidell, LA reached out to our family to provide support through that tough time.  The Slidell Chapter of the foundation hosted their annual walk in October and we decided to be a part of it.  Tanner was 5 months old and it was so nice to be surrounded by other parents facing the same battles we were facing and to see all of the love and support that so many people had.  We walked in the Slidell Walk as Team Tanner 2007-2009.

In February of 2010 my second son, Caleb Jeffrey, was born.  He was also diagnosed with CF and while that isn’t an ideal situation, it seemed to help Tanner tremendously.  All of a sudden he wasn’t singled out or different.  He had a baby brother who was doing breathing treatments, taking pills and going to regular exams with him.  It was such a blessing in disguise.

As we started to prepare for the walk, we realized that we could no longer call ourselves Team Tanner.  We thought about Team Tanner and Caleb, but hated that name!  We put posts on facebook asking for ideas for a team name and then, as a joke, my mom said, “Since both boys middle initial is “J” we could call ourselves the “J” Walkers.  We all laughed at first, but then fell in love with the name.

Every year we walked in the past, our team consisted of me, my husband (Stephen), our boys, my parents and a few times, one or two friends.  We have never had the turn out that we had the last two years and I can't even express how grateful we are to have had such amazing years with so much support from around the country.  We raised almost $10,000 last year and had 6 walks across the country and 87 team members!!  It's going to be hard to top those numbers, but I think we are going to pull it off!  If you are interested in signing up to walk with an existing team, starting your own team in your area or just making a donation please follow the links above!