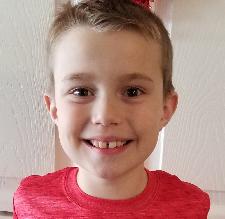 Our son, Bryce (BAM), was born in the summer of 2012 and diagnosed with cystic fibrosis at only five weeks old. He is now a happy, intelligent, and energetic eight-and-a-half-year-old! When he first visited the Cystic Fibrosis Clinic in 2012, his BMI (body mass index) wasn’t even on the growth chart! Now he typically falls between the targeted fiftieth percentile and the seventy-fifth percentile. Bryce loves to run, watch and play sports (especially soccer), play with his little brother (Paxton), play video games, and read!

There are many treatments available for those with CF as each case is slightly different. In addition, real progress has been made in the search for a cure, but the lives of people with CF are still cut far too short. There still is no cure for this devastating disease.

Currently, Bryce uses airway clearance, breathing treatments, pancreatic enzymes, high calorie drinks, CF vitamins and multi-vitamins, an appetite stimulant, a laxative, and a CFTR modulator to maintain his health and function “normally” each day. Airway clearance is typically performed using a vibrating vest that pumps air through hoses and into a vest that vibrates/shakes to help break up the sticky mucus and remove it from his lungs in an attempt to keep bacteria from setting up camp and causing infections. When healthy, Bryce sits for 30 minutes twice a day while using this vest. When he is ill, he will do additional vest treatments and/or manual chest percussion therapy (CPT). Prior to the vest, we did manual CPT at least twice a day as he was too small for the vest.

In addition to airway clearance, Bryce also takes pancreatic enzymes each time he eats something with fat and/or protein, which is most of the time as CFers require those nutrients (and many extra calories!) to maintain a healthy weight. In an effort to keep the weight on our energizer bunny, we try to get him to drink at least one 350 calorie Pediasure daily (if not more) and are constantly encouraging him to eat more. We have also implemented an appetite stimulant once or twice a day to help his appetite. Bryce has mastered the art of taking pills and can take several at a time – I think the most I’ve seen is 6 or 7 at once! He’s been taking enzymes and doing airway clearance since he was 5 weeks old!

In addition to pancreatic insufficiency, the GI tract can be compromised due to the thick mucus, causing constipation and blockages. This is where the laxative comes into play. Including this as a part of his daily routine helps to keep constipation under control and blockages from forming.

If his respiratory culture (a test done at each visit to the CF clinic that resembles a strep culture/swab) comes back positive for risky bacteria, he may also use the nebulizer for that medication or he will be placed on oral antibiotics in an attempt to avoid a lung infection. Bryce not only sits for his treatments (over an hour each day) but he also tolerates using the vibrating vest while doing many of these nebulized medications or eating a meal!

The most recent addition to his treatment plan is Symdeko – a CFTR modulator/corrector that has been proven to not only minimize the symptoms of CF but also to slow down the progress of the disease! This drug works by helping the salt to move correctly throughout his body, thereby decreasing the thick, sticky mucus and minimizing the problems as a result! He still needs to continue his daily therapies (Vest/CPT, nebulizers, enzymes, etc.) for the time being but his overall health should remain steady, if not improve!So far, we are pleased with the results. Although we haven’t noticed any major changes, we have noticed some GI improvements and he seems to weather cold viruses a little easier at times! We don’t know if this the Symdeko or just his immune system improving but whatever is working, we hope it continues!

Although we do our best to not to let CF control our lives, we still need to take precautions above and beyond the "typical family"…especially with coronavirus so prevalent over the past year or so. But we also feel like CF has prepared us for the pandemic as we have always had some limitations... missing out or delaying events and gatherings, utilizing more soap and sanitizer than you can ever imagine, and wearing masks to clinic visits and frequently during cold and flu season.

However, there are some good things associated with CF… Bryce can eat almost anything he wants as he needs MANY more calories than the average person. Although the requirement for a high calorie diet can pose some challenges not only for a third grader but for all ages, we try to focus on the positive and let him eat to his heart’s content … and many days he needs a little "encouragement" to continue eating beyond that point! ;-) That’s where the Pediasure comes into play most of the time – especially at school. Each day, he gets a 4 oz “shot” of Pediasure with his enzymes before he eats lunch at school. That little cup packs in at least 175 calories, 9 grams of fat, and more than 7 grams of protein!

Bryce should also get as much exercise as possible - which isn't really a problem for this 8-year-old boy! He wakes up moving and rarely stops until his head hits the pillow. Anything that changes his method of breathing and gets him moving or breathing hard is another form of airway clearance. Although it does not replace his daily treatments, it does help.

Although Team BAM has been a National Family Team since 2014, we have decided to scale back this year and focus our energy on fundraising for our local walk. Josh and I are co-chairs of the event and although we appreciate all of the support in Manassas and Louisville over the past 7 years, we feel that since our Great Strides walks are going to be virtual this year, now is the time to minimize.

More exciting news over the past few months is the approval of a new drug called Trikafta! This is, by far, the best treatment yet as it is expected to be able to treat as many as 90% of the CF population! Additionally, it has been proven to improve lung function, lower sweat chloride levels (the amount of salt lost form the body and a test to diagnose CF), reduce exacerbations and hospitalizations, and improve overall quality of life… among other things! Although Bryce cannot take this drug yet (it’s only approved for those 12 and older), we expect to see approval this summer for ages 6 and up!

We are very excited and so thankful to all involved!So many great things on the horizon! And although there are several CFTR modulators/correctors available (Kalydeco, Orkambi, Symdeko, and Trikafta), they do not treat all those with CF and they are not a cure. For more information, visit the CFF's Drug Development Pipeline site (https://www.cff.org/trials/pipeline)!

Even though the CF Foundation and the pharmaceutical companies have done GREAT things, we can't stop now!! There is still a long way to go before those with ALL CF mutations are given a chance to breathe easy! By donating to Great Strides, you will help fund research to continue monitoring of those on the newer medications, development of additional medications and treatments, research toward finding a drug that will eliminate not only the root cause but also the need to do hours of daily treatments, and to finding a CURE for not only those with a few mutations, but ALL CFers!

Will you join us? Support us by making a donation to our Great Strides fundraising campaign! Since we started walking in 2013, Team BAM has raised over $86,000 for the CF Foundation! Incredible! For more information about CF or Great Strides, please visit www.cff.org or feel free to contact us!