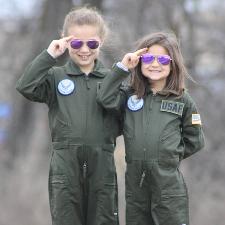 WHAT WOULD YOU DO?

What would you do if you got the call that your newborn baby had a life-shortening disease?  That your child would suffer for years…take too many medications to count, and still be told they would lose the battle before they turned forty?

What if you got that same call two years later with your second child?

It’s a sobering feeling.  You look at your babies and wonder how long they’ll be with you.  You pray every day that God will give them a long, healthy life and that SOMEDAY, a CURE will be found.  And you do EVERYTHING you can to FIX them.

Each spring, we reach out to you to join us in this fight.  It’s getting harder to ask.  It’s getting harder to come up with new ways to raise money for a cure.  But when I look at Sophia & Savannah, I know that I’ll never give up!  I’ll never give up the fight that will give them an amazing life.  Because that’s what parents do.  That’s what you do…isn’t it?….if you got that call?

Please read on for more information about the disease, the foundation, progress in treatment, Sophia & Savannah’s stories, and why we need your help.  Your gift is 100-percent tax deductible and will be used to support life-saving research and medical progress.

WHAT IS CYSTIC FIBROSIS?

Cystic fibrosis is a genetic disease that causes the body to make a thick, sticky mucus that clogs the lungs and other organs, such as the pancreas.  In the lungs, this mucus leads to many infections and damages the lungs.

The mucus blocks the pancreas, so digestive enzymes do no reach the intestines to help break down and absorb food.  People with CF have trouble gaining weight even with a high-fat, high-calorie diet.

Most CFers look healthy from the outside, but CF is destroying their organs on the inside.

CFF is not funded by any government agencies, and the organization has been recognized as a top charity by many independent firms.  $ .90 of every $1 donated is dedicated to research.  The only way the cystic fibrosis community has made progress with this important research is by private donation.  YES, your donation really does make a difference!

The war on cystic fibrosis began in 1938.  In 1955, the foundation became incorporated as the National CF Research Foundation and awarded the first research grants.  In 1961, the foundation developed two accredited care centers devoted to treating CF; by 1962, that number had increased to thirty centers.  During the 1960’s, the foundation launched a patient data registry.  The CFF now maintains 100 centers.  The average survival age for a person with cystic fibrosis in 1962 was 10 years old.  Just last year it was 37 and today it is 50!

There are many different mutations of the CF gene; therapies which work well for certain mutations are ineffective against others.  In the past three years, the FDA approved KalydecoTM to treat people ages 6 and older who have one of nine cystic fibrosis mutations.  Kalydeco, a breakthrough therapy, is the first drug to treat the underlying cause of cystic fibrosis rather than improving symptoms.

Other treatments include: chest physiotherapy, nebulized medications, pancreatic enzymes and vitamin supplements, nutritional supplements such as PediaSure, acid reducers, laxatives, oral and inhaled antibiotics, the list goes on and on!

Both girls have two mutations of the CF gene, one from each parent (Delta F508, the most common and more severe type, and G551D, the “good” CF genetic mutation which can be treated with Kalydeco).

Sophia and Savannah begin and end everyday with breathing treatments and 30 minutes of chest physiotherapy.  If either girl gets congested, she will do both treatments and therapy four times a day.  Along with a concoction of medications taken throughout the day, this is their “norm.”  They fight every day to just be “healthy.”  To look at either girl, you would never know they were sick.  They are like any other playful, energetic kids-they just happen to live with CF.

Last year, Sophia entered kindergarten.  Although she was beaming with excitement, being exposed to so many germs has added a new threat to her and her sister.  Because the lungs of those with CF do not function properly, what could be a simple common cold for a child without CF could turn into a serious, life-threatening infection for the girls.

We are currently (anxiously) awaiting FDA approval for Kalydeco for children ages 2-5!!!  Once the girls are able to take Kalydeco, their lives are predicted to change for the better!  If they respond to the medication, treatments may be significantly less, medications will lessen, weight gain will be much easier, and their life expectancy will be tremendously higher!!!!

WHAT CAN YOU DO?

THANK YOU FROM THE BOTTOM OF OUR HEARTS!!