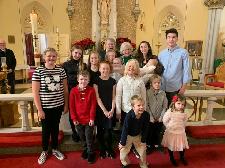 In October 2019, the latest "CFTR modulator" drug was approved by the FDA. Drew started taking it in March 2020, just as the pandemic was locking things down. It will slow the progression of the disease in his lungs. There have been 3 modulators that have come to market before this, but all these modulators target specific mutations. The latest targets a mutation that will reach about 90% of those with CF. We will not stop at 90%. We will not rest until we have a treatment for all those with CF. We will not stop until we have a cure for everyone with CF.