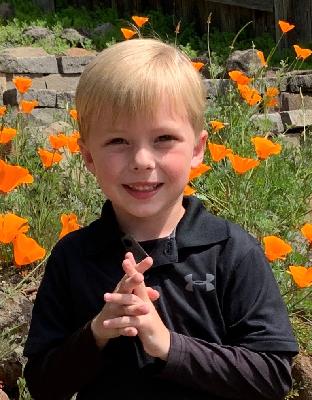 Springtime walks are always fun, right?  Well, we've got a walk for you.  To benefit the Cystic Fibrosis Foundation and to find a cure to the terrible disease known as Cystic Fibrosis.

We walk for Buster, our grandson.  He is almost seven years old.  He's perfect, but despite that perfection, he has Cystic Fibrosis, a terrible and terminal genetic disease.  That means he cannot digest his food like you and us.  Any infection is very serious for him, because his lungs and other organs fill up with a thick, sticky mucus that will eventually prevent them from working altogether.  He takes several medications (about 40 pills each day), breathing treatments (twice each day) and chest compression therapy (twenty minutes twice each day).  Every day.  He will for the rest of his life.  If he gets sick, all of those numbers will rise exponentially.

Great things are happening in the world of research on Cystic Fibrosis, since the gene that causes CF was identified in 1989.  When we were young, kids with CF did not live long enough to begin elementary school.  People with CF now live to an average of over 37 years.  Doctors say that Buster's life expectancy could be 57 years or more.  There is genetic therapy being developed, and there are wonder drugs out there, and more in development, largely due to the work of the Cystic Fibrosis Foundation.  The drugs relieve symptoms but are not a cure.  But, there are no wonder drugs yet for Buster.  And the wonder drugs that are being used and in development are incredibly expensive ($300,000.00 per year per patient - for the rest of their lives).  Buster now takes one of those drugs - Symdeko

That's where we come in, and hopefully you too.  Once a year, we walk in support of Buster.  We walk in support of the Cystic Fibrosis Foundation, which funds and supports the development of those drugs and treatments.  And we walk to give hope to tens of thousands of children and adults who live every day with this disease.  To give them more tomorrows.  We all want more tomorrows, don't we?  You can help give Buster, and thousands of people with CF, more tomorrows, by donating, walking, encouraging and supporting.

Buster’s Buddies will be walking again at Heather Farm Park, in Walnut Creek, on Sunday, May 3.  Registration at 9:00 a.m., walk at 10:00 a.m. and lunch at about 10:45 a.m. We’ll be done before Noon.
Since 2013, before Buster was born, about 300 family and friends have joined us to walk in Walnut Creek, Moonlight Beach and Gustine, as Buster's Buddies.  We have raised over $370,000.00 for the Cystic Fibrosis Foundation.  While we are humbled and greatly appreciative of that support, we have to wonder - what can we do in 2020?  We hope that you will join us to find out together.
Thanks for your support for Buster and all of those who suffer from this terrible disease.
Until it's done.
G-Daddy, also known as Grandpa (formerly known as Dennis) and Grandma (formerly known as Suzanne)
View More
View More
Join Team
Team Roster
Raised