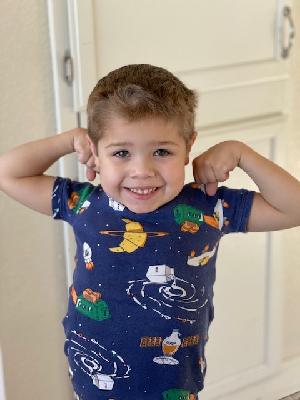 My journey with CF begin on July 29, 2016, 3 weeks after giving birth to my first biological child, Lincoln. Everything went well with the pregnancy and the delivery except for the mere fact it took 3 days to get him out. The most beautiful baby boy. The most healthy baby boy you could imagine. For the first 3 weeks he had been thriving with some minor issues around weight gain but nothing alarming. Everything seemed to be perfect. So the call we got that Friday afternoon completely pulled the rug from under us. His new born screening results had come back and confirmed he had cystic fibrosis. For the first 2 hours that followed, I fought the diagnosis knowing the tests had to be wrong –people have children all the time and they are fine. There was no way, with our healthy backgrounds, that my son had a fatal genetic disease. I had known that I was a carrier through genetic counseling but my husband wasn’t. So the message was that we were in the clear and there was nothing to worry about. Unfortunately for us, he had one of those rare nonsense mutations that they just don’t test for.

I remember that day of the diagnosis very vividly. I remember after being on the phone for hours with doctors and nurses, having to drag myself to the local Walgreens that day to pick up his first prescription of this drug called Creon which was the pill that would help him gain weight and absorb nutrients from the food he was eating because his natural enzympes wouldn't work on their own. I remember trying to muddle my way through a conversation with the pharmacist, tears streaming down my face, mascara everywhere, not being coherent at all but trying to explain what I needed and trying to prove that my insurance covered him at 3 weeks of age. And as she studied the prescription, she looked up at me and grabbed my hand and asked if he had CF. I slowly nodded my head and she said I’m so sorry, I donate to this cause every single year. And In that moment  I knew my life as I knew was it behind me. All of a sudden I found myself on the wrong side of a cause. Now Instead of me being able to help others with their tragedies, now I needed to depend on others to save me from mine. Our lives became filled with tons of pills (I believe Lincoln is up to 30 a day), multiple breathing treatments every day and even more when he is sick. At a minimum Lincoln has done close to 4,000 treatments to date. He has constant doctor appts and we have to live with the ongoing fear that every time he coughs it may turn into a hospitalization or worse yet the beginning of the deterioration of his lungs that would eventually lead to his death.

In the midst of what I felt was complete hopelessness I leaned on the support of the people around me and eventually I found hope and the energy I needed to engage myself. I had finally accepted the fact that I couldn’t change his diagnosis but the difference was that now I knew that I had the power to change his outcome. Life will throw unimaginable things at us and there will be a time in all of our lives, where we will fall. My mother, who I sadly lost about 8 months after Lincoln’s birth, taught me that in these moments, you take your time to grieve, you get angry, you feel sorry for yourself, but when you are done there is only one option and that is to stand and YOU FIGHT. So I stood and I started being the Mom Lincoln deserves. But I do not stand alone. I have an amazing family and amazing  friends, including those I have met along the way who are traveling this road with me on a daily basis, the CF Foundation who has supported me since day one and finally Chubb, the company I have worked with for 15 years. I would be remiss if I didn’t mention all of the amazing contributions they have made to support me.

And now look at where we are today? Thanks to the foundation and the amazing research that has been conducted we have had some amazing drugs emerge, Calydico, Orkambi, Symdeko which have proven to help so many and now we have TRIKAFTA!!!!! An amazing drug that was just recently approved by the FDA for 12 and up is literally changing the game for those that can use it, Lincoln being one of them. The results are nothing short of amazing and is available for 90% of the CF population. This is truly ground breaking but we aren’t done yet b/c I didn’t say 100%. We have to focus on finding a pipeline for the other 10% that this drug won’t help. And remember that even with Trikafta, as awesome as it is, it’s NOT a cure. We still have work to do. Each one of us has the power to change the world when we come together for a common cause. We don’t have to be doctors to save lives. Together, we can be a part of this success story by continuing to show up and show our support. This is one battle we simply don’t’ have to lose. I don’t ever again want a mother, days after giving birth to their child to have to look online and see the words FATAL and LETHAL next to her child’s newly diagnosed condition. And I certainly don’t want Lincoln to see those devastating words when he is old enough to research CF on his own. Instead they should be seeing the words:

FULL LIFE EXPECTANCY and one day.....

There will come a day much later down the road where we all look back and we have a story to tell and I can assure with absolute certainty that giving my child up to CF is not my story.

So please join me. Help me rewrite the story of Cystic Fibrosis and give my son more tomorrows.