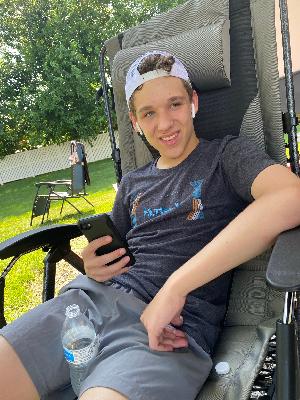 Welcome to the team page for Noah's Hope!

I participate in this walk and fundraier simply to raise money for the Cystic Fibrosis Foundation, and I am asking you for a donation.  Cystic Fibrosis is a disease caused by a genetic defect.  It disrupts the function of the entire body affecting primarily breathing and digestion.  To oversimplify the biology, the cell defect disrupts the movement of salt through the cells resulting in thicker mucus throughout the body.  The mucus clogs the lungs and harbors disease.  The mucus covers the pancreas which blocks the enzymes from releasing to digest food.

Over 15 years ago my son Noah was born with CF.  Before then, I had never heard of it. Diagnosed before he was born, what should have been an exciting time for expectant parents was filled with parallel emotions of fear and anxiety.  We didn't know what this disease was, how this would affect his life, how we would treat it, and who would treat it.

In a short period of time we became well informed.  We found a physician.  We learned what our daily routine would be like.  We learned what medications he would need and how we would have to give them all to an infant. This involved a nebulizer and manual chest percussion therapy twice a day for a total of two hours.  This involved opening capsules of enzymes and mixing them with apple sauce for him to take before each meal.  Special vitamins, inhalers, antibiotics, and sterilization of just about everything he touched.  We used purell and fist bumps before it was cool.  People sneezed or coughed, we ran.

Fast forward to 2012.  Noah was 6.  A long anticipated time for the CF Community was the FDA approval of a new type of medication called Kalydeco.  Kalydeco was the first drug of its type to have the ability to correct the defect in the cell, allowing it to function, and allowing mucus to finally start clearing from the lungs and letting the body for the first time, be able to correct itself.  Kalydeco was the most simple of this new class of medicine.  However its chemical composition only made it effective for treating a very low percentage of the Cystic Fibrosis patients with a rare and less complicated mutation of the disease.

However, using the same science, Orkambi, Symdeco, and later Trikafta were all created, all within a few years time.

Noah is fortunate enough to benefit from these medications, which have also benefited thousands of others. This was an amazing breakthough which transformed lives.  It is not a cure, and its individual effects depend on many variables, but so importantly, it helps people live better, healthier lives.

I continue to do this every year I can because I am grateful for the work the Foundation has done in helping my son and the tireless and dedicated work it does to help everyone with CF.  These new medications, new therapies, and new discoveries are only possible because of the Foundation.  Without private donations and the help of volunteers, there are no resources.  With the Foundation and its volunteers, remarkable progress has been made.

Again, and to be quite blunt, I ask for your help in the form of a donation.  There is no suggested amount.  This year the walk will be at the Cedar Crest College campus in Allentown.  The date/time is Saturday, April 30 in the am and the coffee, donuts, and bagels are plentiful.  If the weather is good, it is a 2 mile scenic stroll around the campus.  All are invited to join me in this walk.  I like the company, the snacks, and most certainly the satisfaction and purpose this gives me.

I hope you'll donate and join me if you can.