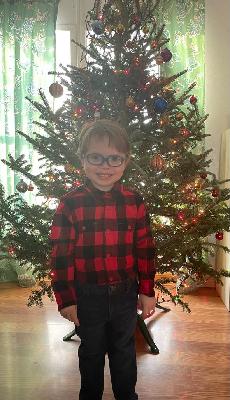 Isaiah was diagnosed with Cystic Fibrosis when he was just a week old at Albany Med after he was admitted there for not breathing after he was born.
He was also admitted into the hospital when he was just a month and a half old for he stopped breathing at home and had his second helicopter ride in life he had the virus and for bacterial infections.
Isaiah turned four this past November he was supposed to start preschool but things didn't work out which I'm thankful for with all the Covid but he still continued his in-home therapies which are occupational, Speech, physical, and special education therapist.
Isaiah was also diagnosed with autism this past year.
He has had a great year healthwise only a mild cold he is still currently taking the trial medication Orakombi. He has been gaining weight which we were starting to worry about but he is getting up there.
Isaiah is a very happy boy, has an amazing personality, loves his family, his dog Emma and loves being at the ocean and he is currently doing great with puzzles.


There are approximately 30,000 Americans living with cystic fibrosis. They are moms, dads, sisters, brothers, daughters, sons, and friends who struggle every day just to breathe. I walk for them. Will you join me and support my fundraising goal?
Real progress has been made for those who have CF, but there is still no cure for this devastating disease and many lives are cut far too short.
View More
Donate Now
Join Danielle's Team!
Isaiah
Achievements