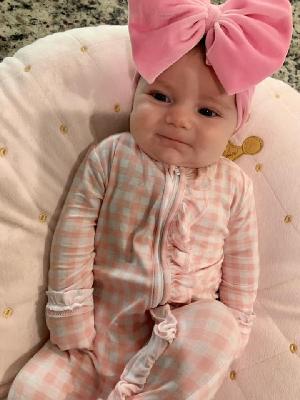 For too long, cystic fibrosis, a rare, genetic disease, has robbed people of tomorrows – progressively limiting their ability to breathe and tragically shortening life. There are approximately 30,000 Americans living with CF. They are moms, dads, sisters, brothers, daughters, sons, friends, and co-workers who struggle every day in the face of this devasting disease. We walk in Great Strides for them.

Here's our story as to why we started bringing awareness:

As a mom that didn’t attempt to breastfeed my son, I wanted nothing more than to do so with Jena. From the moment we tried after birth, she was having such a hard time feeding. It just wasn’t working out, but I wasn’t exactly sure why. I spent hours with the lactation nurse trying to help us and it still was just so hard. I was committed though and when we brought her home, I was still trying my best. 2:00 in the morning came one day and I said, forget this, she’s starving. I’m going to make a formula bottle. Formula went everywhere!!! I mean everywhere. I wasn’t even sure how much milk she was actually even getting. I knew this couldn’t be normal. I asked for advice on FB, and a college friend of mine had asked me if we had seen a speech pathologist for a newborn feed screening. Didn’t even know that was a thing, so I found a speech pathologist in Frisco which by the way has been the best decision I’ve ever made and has been the biggest blessing and help EVER! this had already been going on for about 3 solid weeks at this point and we were desperate for help and for her to be able to eat right. Barely any milk intake calls for a super fussy baby. Jena’s speech pathologist found that she had a tongue AND lip tie. Her tongue range of motion was extremely restricted which caused this issue. The good news was though, a dentist procedure to laser the extra skin off would be a simple deal and be over quick! Well Corona got in the way and so we had to wait originally until June.

As this time was going on, every week got worse and worse. She was STARVING and she was hurting. She would latch off her bottle and scream in pain. I was helpless and desperate for answers because I knew she was in pain. The lip and tongue tie wasn’t the only issue. Jena at this point went to another speech pathologist apt and found then that she was 99.9% sure she had silent acid reflux. It didn’t sound that bad, but let me tell you. I wouldn’t want this to be brought upon anyone! It’s been sooooo sad and so hard to watch her battle daily in pain. Luckily, her pediatrician has put her on medicine for that, and it has helped a whole bunch. Its not a cure-all but we are better than what we started out with. In addition to all of this, poor girl couldn’t have a bowel movement on her own which is double pain! Shes seeing a chiropractor, a GI doctor, speech pathologist, and all in between! Friday we have another test to make sure her milk is going down the right pipe, but my baby girl is already gaining weight thank goodness because her meds have allowed her to eat!!

And then while all this was going on on top of this junk, since she was/is having stomach issues and respiratory type stuff going on, cystic fibrosis could have been a culprit. Both newborn screenings said she had elevated levels of CF. Since all her issues, we were really scared that she could actually have it. we finally were able to get an appointment at cooks and find out once and for all to see if we can get to the bottom of that so we don’t have to worry anymore if this is what’s causing her issues or not, and glory to God, she most likely isn’t even a carrier! The sweat test results came back negative!!

So where we stand today is, her meds are helping a lot but by no means is she 100%. Babies after a year old usually outgrow this, but that’s a long time to deal with daily. So now we are praying she is healed and does not have to depend on medicine to have her stomach work like it’s supposed to. She has had more good moments than bad lately, and we are so thankful for that. She also had her tongue and lip tie procedure earlier than June and is able to actually put down a bottle. I’m so sad though because this was the culprit as to why she couldn’t breastfeed and by the point of her surgery, I wasn’t able to produce milk for her.

Because of our CF scare and spending 9 weeks frantically researching this disease before we got the results for our baby girl, I realized not too many people know what this actually is, and since there is no cure, our family wants to help contribute to make a difference.