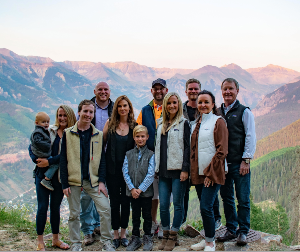 It’s Katie Bieler here! I am 26 years old, the youngest of five children and the only one with cystic fibrosis. I was born and raised in the heart of Dallas, Texas. And, when I was born, it became clear to my mom (who at the time was a pediatric ICU nurse) something was a little different. I coughed like a seal (what’s not cute about that), I preferred a high carb low fat formula (because my stomach got super sick otherwise), appeared to have asthma (which pediatricians are reluctant to diagnosis before the age of three), and sweat so much my skin was like a “salt lick” for farm animals. My pediatrician thought maybe I had polyps, and that was what was causing my barking seal cough, or maybe chronic bronchitis, and then …I was diagnosed with a right middle lobe pneumonia. A very unusual diagnosis in a child. I was treated with steroids and antibiotics but nothing really changed.

Finally, my mom suggested (after conferring with a couple close family friends who were both in the medical field) that I have a sweat test performed for cystic fibrosis. And then it all began – I did have cystic fibrosis and this answered so many questions of why I was small, why I tasted like salt, why I didn’t like high fat foods, and why I had the barking seal cough. Finally, my parents had some answers.

Shortly after my diagnosis, I was admitted to Children’s Health for a “clean up” - intravenous antibiotics and a dose of steroids. My entire family learned how to help me with my treatments (twice a day) and then the real journey began.

Cystic fibrosis is a life-threatening, genetic disease that causes persistent stomach issues and lung infections and over time limits the ability to breathe. I did really well as a youngster without any major issues or hospitalizations. And, then I was a teenager, invincible, …a normal healthy teenager…so I thought. My health began to worsen at different times of the year and oral antibiotics were not as effective as they once were. The doctors and care team at the Claude B. Prestidge, M.D. Cystic Fibrosis Center at Children’s Health were my life line, and the best team on the planet. They created an individualized treatment plan which allowed me to go to school, swim and still have enough time for my CF treatments.

Then I started college, started making my own decisions about my healthcare and it was difficult – the treatments, school work, extracurricular activities, finding time for good food, motivational speaking at CF Fundraising Events, laundry, sorority, and a social life. What I didn’t realize was that cystic fibrosis was and is a full-time job – and, it isn’t going anywhere.

I have received my bachelor’s degree (which I am very proud of), working full time up until July 2019, exercising, living on my own, and now more than ever making time to share my story. The past year and a half has been one heck of battle. I always felt so sick and tired, I wasn’t responding to my normal course of IV antibiotics during the times they were needed, I saw a 20% decline in my lung functions and I lost 19 pounds that I couldn’t afford to lose. My CF team decided that I needed to get a CT Scan of my chest and give them a sputum culture to look and test for Mycobacterium Avium Complex (MAC). Unfortunately, that is exactly what it was, and I felt completely defeated. In August 2019, I started a very intense course of IV therapy that I will continue to do every day for 12 months. From August 2019 to August 2020, I will have completed 1,825 doses of IV antibiotics and 730 doses of oral antibiotics (and that doesn’t include any additional IVs if I were to get some other type of lung infection). Fortunately, my team of doctors gave me the answers I needed and I am responding very well to my IV therapy—I’ve seen in increase in both my lung functions (PFTs) and weight. This IV therapy has been extremely mentally and emotionally challenging for me, and I’ve to take life just a few hours at a time. I’ve had many moments of frustration, a lot of tears and feelings of isolation.
On the other hand, I’ve had wonderful days, even more wonderful news and opportunities that I will always remember. I was chosen to be the Cystic Fibrosis Foundation 2020 Great Strides Local Ambassador, which is such an honor and privilege. I am looking forward to and challenging everyone involved to make this year the best yet. Also, the triple combination-therapy, Trikafta, was FDA approved months earlier than expected for 90% of the CF population. I’ve only been on Trikafta for a short period of time, but I’ve already felt and seen such positive results for not only myself, but also those who are able and approved to take this medication.  With that being said, Trikafta IS NOT a cure. We still have a long ways to go. My goal is to help raise awareness and funds to help those individuals that do not benefit from Trikafta--they deserve this just as much as the 90% of CFers who can take Trikafta.

None of it is easy and the CF community needs YOUR help. CF doesn’t define me but it is there every day – waiting for me when I wake up, the last thought I have before I go to sleep – I am living a good life though and it’s because of people like you who help all of us with CF by helping to find a cure.

We can’t stop now - we must continue to fund this important life-saving research, because a 90% benefit to the CF population isn’t 100%. The time is now, join me and my KREW – help us FIGHT this battle. DONATE TODAY. LIKE, RIGHT NOW! THANK YOU for CARING!