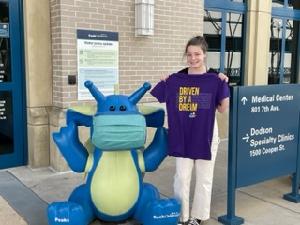 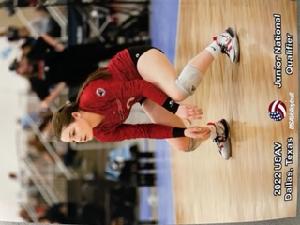 This year is a big year for Avery; she is the Dallas Great Strides Ambassador! Avery gets to make videos and content for the North Texas Cystic Fibrosis Chapter.  This has been great for Avery to understand why we support the Cystic Fibrosis Foundation.  For years she just knows she get to go to a walk and we hang out and get food, but now the 'why' is sinking in.

What is the 'why'?  Lets start with Averys journey with cystic fibrosis. Avery was diagnosed when she was one month old.  We didn't have any history of cystic fibrosis in our family so this was quite a shock.  Mike and I attended our first doctors appointment at an accredited cystic fibrosis center in Phoenix shortly after her diagnosis.  The doctor and the care team were amazing and told us Avery would outlive us.  I think there might have been some tears involved with that statement:)  The first year of Averys life she attended over 120 doctors appointments.  She had to start taking enzymes right away to help digest fat and protein.  Before each bottle we had to give her some applesauce with her little pills.  We also had to add salt to botttles as patients with this disease lose more salt than a normal person.  To this day you could lick Averys skin and find it very salty!  Avery continued to gain weight for several months but then leveled off.  After changing her formula several times it was apparent we needed to do something and that is when her feeding tube was placed.  Avery would recieve extra calories pumped into her tummy every night so she could maintain her weight.  We also started chest therapy where we used a cup to beat against her chest twice a day to break up mucus from her lungs.  She also started albuterol treatments when she was 6 month old.

After her first year we ended up moving back to Texas and she started going to Cooks Childrens in Ft Worth.  There she meets with her pulmonologist, Dr Cunningham and her care team every three months.  Averys health for the first few years was pretty stable.  At 2 years old we started "shaky puff-puffs" or if you want to be technical she does vest therapy.  The unit pumps air into a vest and vibrates trying to break up any mucus she has in her lungs.  I remember us watching a lot of movies with her and bribing her with M&Ms to keep the vest on!  In addition to the vest she was also doing her nebulizer.  She was doing well until she cultured Psuedomonas (if I spelled that wrong, sorry).  You see at each visit they stick a long q-tip down her throat to get a culture.  The culture came back with the dreaded psuedomonas when she was about 3 years old.  Culturing this bug added another nebulizer to our 2 times a day schedule and they also added another one on to help as her general health as well.  So in all she was doing shaky puff puffs for about 2 hours each day.  After we tried to eradicate the psuedomonas at home and it didn't work we admitted her to the hospital to try and eradicate.  Unfortunately the 10 day stay didn't eradicate this from her lungs and now we consider colonized with psuedomonas. This bug is not something a normal healthy person worries about, it is only in CF patients you worry about.  This nasty bug hangs out in her lungs and waits for her to get sick.  Then it starts to multiply and causing inflammation.  This bug and one other are the nasty bugs that cause patients with CF to get lung transplants.  It is the recurring infections that break down the lungs.  Avery continued to do well for another several years and was able to get her feeding tube removed.  We worked with dieticians to make sure Avery has a diet high in calories, protein and salt.  As a lot of you know McDonalds was a big go-to for us!  She still loves her nuggets and fries!

Avery has not been in the hospital since she started school.  Its interesting that many people are now using infection control guidelines we have been using since Averys diagnosis.  Avery has always had a water bottle at school and was never allowed to drink from a fountain.  At restaurants/grocery stores we always wiped things down with clorox wipes (always stocked in my purse).  We used hand sanitizer and hand wipes before and after we ate.  If someone had a cough or runny nose we avoided them like the plague!  Its so funny to our family that it took COVID to normalize what we already do!! I digress, I just wanted to make you aware we implemented these things so Avery continued to be healthy.

In March of 2020 (right before everything shut down for COVID) Avery took her first dose of Tricafta.  What is Tricafta?  Game changer.  That is what this is.  But if you want a technical definition; TRIKAFTA adds elexacaftor to tezacaftor and ivacaftor to target CFTR protein defects caused by the F508del mutation or another mutation responsive to TRIKAFTA.  Yeah, to be honest I don't know what that means either except the drug is affecting the underlying cause of cystic fibrosis in their body!  The first day Avery was on it, she coughed up a ton of mucus.  She also had a big weight gain after starting this medicine. They think that Avery might be able to reduce the amount of chest therapy and nebulizers she does each day.  They are waiting on some studies before they can say this, but Averys lung function tests have been amazing since starting this medicine.  Other patients that have been so terrible sick have seen dramatic changes in lung function and weight gain.

Today Avery is playing club and school volleyball.  She hangs out with her friends.  She goes to school.  She really looks like any other normal kid!  We have been so incredibly lucky in Averys health and her journey with this disease. AVERY IS HEALTHY BECAUSE OF THE CYSTIC FIBROSIS FOUNDATION (CFF)  The drugs she is on, has been on have been partially or fully funded by the CFF.  The accredited CF center we go to is partially funded by the CFF.  The way she does her treatments (the order of medicine and how she does them) have been scientifically researched and have been funded by the CFF.  The CFF has lobbyists fighting for the voice of those affected with this disease to protect their rights.  I could go on and on, but this organization is the reason Avery looks like a normal 14 year old kid.

So here is the ask, could you, would you donate a bit to help Avery and others with this disease?  Any amount is appreciated! Truly. Our goal is to get to $5K by May 21st for our Great Strides Walk.