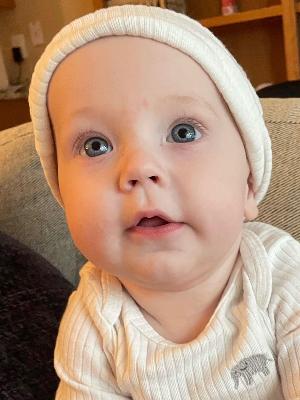 Bellamy was born November of 2021. Cystic Fibrosis was on our radar as we had previously found out we were carriers through prenatal genetic testing. We declined amniocentesis testing because of its risky invasive nature, and it would not have changed anything for us. We wanted this baby boy regardless of the outcome. Bellamy had no signs of CF during the pregnancy, but shortly after his birth we started noticing the signs. Bellamy nursed around the clock but was not gaining nearly as much weight as our first child did. He was very skinny and his diapers were constant and not normal. After about a week we knew something was very wrong. After waiting and waiting for the results of his newborn screen we finally got the call that our son does in fact have cystic fibrosis. He has two of the most common mutations- DF508. We were all heartbroken, but quickly learned through the CF foundation and our care team at Children's Omaha- there is HOPE. This disease is devastating; causing extreme lung damage, pancreatic insufficiency, diabetes, terrible infections, the list goes on and on. BUT- there has never been a better time to be born with CF. There are game changer drugs available and more being developed right now due to the CF foundations unrelenting fight for a CURE! Please donate today- to give little warriors like Bellamy the chance to live a normal lifespan.

A little glimpse into Bellamys daily life with CF:
Everyday our son Bellamy must take upwards of 40 pills just to digest his milk. With every feeding we empty out capsules into a spoon and feed him the contents- this is pancreatic enzyme replacement therapy. His own pancreas is blocked with mucus preventing his own pancreatic enzymes from being released. Every morning we give him an inhaler followed by manual chest percussions to break up the sticky mucus in his lungs so he can cough it out. This sticky mucus traps bacteria and causes infections and damage to his lungs. After percussions he receives an inhaled steroid to help the inflammation in his airways that cause a persistent wheeze if not managed. Following percussions Bellamy takes an oral medication to help neutralize his stomach acid so his enzymes that he takes can better survive down his digestive tract to help him absorb nutrients, protein, and fat from his milk. This same percussion routine is repeated in the evening but we do an additional nebulizer treatment with percussions to further help break up the mucus in his lungs. Treatment is again followed by the same acid neutralizing med. Bel also takes a vitamin supplement everyday as well as salt with every feed because his body is deficient in crucial vitamins due to his malabsorption- and his body loses 3-4 times as much salt through his sweat as a normal baby.

Join our team and help us get one step closer to a cure for cystic fibrosis - a rare, genetic, life-shortening disease that makes it difficult to breathe.

With supporters like you by our side, the Cystic Fibrosis Foundation continues to lead the way in the fight against CF, fueling extraordinary medical and scientific progress. The life expectancy of someone born with CF has doubled in the last 30 years. Despite this progress, many people with CF do not benefit from existing therapies either because their disease is too advanced or because their specific genetic mutations will not respond. They are moms, dads, sisters, brothers, daughters, sons, friends, and co-workers who struggle every day in the face of this devasting disease.

We walk in Great Strides for them.

By joining our Great Strides team and making a donation, you will be part of a tenacious and passionate group of people committed to ending this disease. Together, let's make CF stand for Cure Found