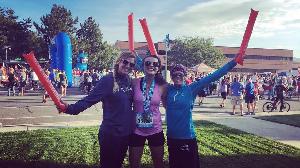 You Vs. Cystic Fibrosis: What Drives You To Fight
Posted by: Martha Garvey

Cystic Fibrosis is a relentless disease. Every day with Cystic Fibrosis is a fight. Every day you enter the ring with your opponent, it’s the exact same opponent that knocked you out the day before. You know your opponent very well, you’ve been facing each other for years. You go toe to toe, sometimes for several rounds. Once in a while you think you may have the upper hand but your opponent is sneaky and tends to get you out of nowhere. You start to slip up, the punches are coming at all angles, blow after blow. You know you’re in trouble. You go down. The whistle blows. It’s another knockout. Some spectators are worried about you but those who are familiar with the sport know the routine and know what comes next. It’s time to seek medical attention. Eventually you’ll start training again and hopefully you put some weight on this time because whether you like it or not, it’s time to go back in the ring. There’s another fight. Your opponent never quits and neither do you.

I know each person’s story with CF is different so I can only speak for myself when it comes to what inspires me to fight this disease day in and day out. My friends and family will be the first to roll their eyes when I explain how big of a Rocky Balboa fan I am. I grew up watching the Rocky movies and I have yet to stop. I don’t think I’ll ever outgrow them. Quoting Rocky quickly became my weird hidden talent as a kid.

I even tried to become Sylvester Stallone’s pen pal when I was 11 years old. There’s a line in a song in Rocky IV by Survivor that goes, “In the warrior’s code there’s no surrender. Though his body cries stop, his spirit cries never!” I can’t think of a line that better describes the resiliency of people with Cystic Fibrosis. There are many times my body and mind aren’t on the same page but these are the reasons I keep going. This is why my spirit cries never.

First and foremost it’s my parents. They have sacrificed so much for the sake of my brother Ray and I. My dad worked his butt off as a police officer to ensure we had the best health care coverage possible. My mom put her teaching career on hold to take care of us at home until we were old enough to attend school. She may have studied elementary education in college but like many CF parents, she has earned an honorary nursing degree by caring for Ray and I.

On top of the everyday duties every parent has to be responsible for, my mom also had the task of caring for two rambunctious kids with CF which is no small feat. Before the technology advancements of the airway clearance machine aka The Vest, my mom had to do our treatments by hand, for a half hour on each kid, twice a day. She washed and made our neb cups every day, she made sure we took all our medication no matter how much we hated it.

My mom made home cooked meals most nights to ensure we had the high calorie diet we needed. She brought us to the U of M every three months for a full day’s worth of appointments. She learned how to administer feeding tubes, IV antibiotics and eventually insulin pumps. My parents advocated for us and our education when we would miss large amounts of school. On top of all the medical hoopla, my parents gave us a sense of normalcy. We were always encouraged to participate in sports, school activities, church events, and neighborhood gatherings. With my parents’ positive attitude, I never felt like I was missing out or not capable of doing something. They have this great balance of caring for me but not babying me. They let me live my life and even allowed me to go out of state to Colorado for college my freshman year. My parents gave us everything we needed and I can never thank them enough. They are the biggest reason for why I continue to take great care of myself. I cannot think of a bigger slap in the face than to slack off after all their hard work.

My inspiration for the past 19 years has been my brother Ray. Ray passed away in April of 2001 from a non CF related issue. He and I were very close despite having a five year age gap. We were the biggest trouble makers together and our number one goal in life was to have fun.

Ray’s death was sudden, unexpected, and life changing. I know I have a different perspective on things because of losing him. I don’t take people or moments for granted. The everyday things in life have a greater meaning because I know they aren’t always a given. I don’t see a point in complaining about small things like homework, bad weather or any other minor inconvenience. Ray didn’t get to attend high school, get his driver’s license or graduate college. He was robbed of many experiences. Ray also doesn’t get to benefit from the new advancements in medicine like I do. I get to try the newest insulin pumps on the market, I get the new CF medication coming down the pipeline. I get to keep going. Out of respect for Ray, I refuse to waste my life. I want to experience everything this weird and crazy life has to offer and I plan on doing it with a smile because I know that’s how Ray would’ve done it.

Everyone with Cystic Fibrosis knows, this disease is a lot to handle to say the least. The daily medications morning and night, the hours of airway clearance treatments we do for our lungs each day, constant cleaning and ordering medical supplies and equipment, weird side effects to antibiotics, hospital stays, monthly doctor visits, the list goes on and on and it never ends. I would say Cystic Fibrosis is a fulltime job except we don’t clock out once we hit forty hours for the week, we don’t get weekends or holidays off and our “sick time” is all used up by the time we need it most. It’s easy to become bitter, overwhelmed and to lose your drive. It’s important to take a step back and reflect sometimes in order to regain the fire. I think Rocky Balboa said it best “The world ain’t all sunshine and rainbows. It’s a very mean and nasty place and I don’t care how tough you are it will beat you to your knees and keep you there permanently if you let it. You, me, or nobody is gonna hit as hard as life. But it ain’t about how hard ya hit. It’s about how hard you can get hit and keep moving forward. How much you can take and keep moving forward.”

*Que Eye of The Tiger*

There has been tremendous medical advancements this past year especially for the cf community. A drug called Trikafta was approved by the FDA in the fall of 2019. It is known as “the miracle drug” for 90% percent of people with a specific cf mutation. I have been having awesome results because of this drug! But our fight is not over until EVERYONE with cf can breathe easier and live longer. Trikafta is not a cure, those on the drug still have cf and still are fighting. Please if you can, donate, spread the word and help us make cf stand for Cure Found. This disease is tough, but so are we.