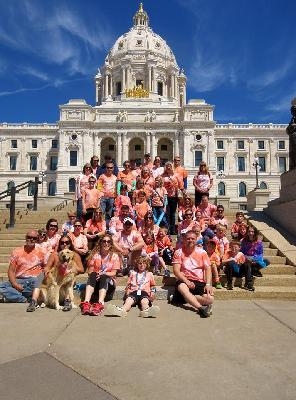 Thank you for your support in the Great Strides Campaign!

Thank you for your support in the Great Strides Campaign!

Join Mason and his team of Marchers for our 11th consecutive year in the Great Strides Campaign!

Any and all donations are greatly appreciated, every penny counts!

At just 6 days old, Mason was diagnosed with Cystic Fibrosis. The phone call was devastating. It went something like this: "Are you sitting down?" "We have some results from Mason's newborn screening...are both parents present?" "You should put the phone on speaker." "...Cystic Fibrosis...University of Minnesota..." And as the saying goes, the rest is history. Since that phone call, Mason has spent over 3,500 hours of his life completing vest/nebulizer treatments to maintain and sustain his health. Mason spends at least 60 minutes of every day completing breathing treatments. He's taken thousands and thousands of pills to assist with the digestion of food so he can grow just like anyone else his age. He's spent countless hours being looked over, poked and prodded by doctors to ensure he is healthy and stays healthy in spite of having cystic fibrosis.

Mason peaks in growth curves, his lung function is normal to above normal and he has suffered just a handful of respiratory and digestive bouts that have been directly related to CF. Because Mason is so "healthy," we often hear comments such as "He doesn't look sick," or "He has CF, really?" Initially, as parents, these comments weighed heavily on us. We have come to realize though that most people are just unaware of the time our family has invested in fighting this disease, including the multitude of doctor visits, all the poking and prodding Mason endures, the number of respiratory treatments he has done, the amount of medications he takes, the constant need to refill prescriptions, insurance company battles, the sheer number phone calls made on a regular basis to assist with managing the disease, the organization and communication needed to ensure he has what he needs during the school day. When he has a cold, is it a cold? Or is it something else? Should we take him to the pediatrician or the CF clinic? Not to mention the financial cost of this disease. Fortunately, we live in a world where we have amazing organizations such as the CF Foundation, ongoing research and access to phenomenal medical care that all allow Mason to create the perception of not being sick. Truth is, now we take these comments as compliments, as a direct reflection of all the time and effort we as a family put into CF, day in and day out, to sustain Mason's health and well being.

Real progress has been made in the search for a cure over the last few years. The life expectancy for people with CF is now just over 40 years old. While that figure has essentially doubled over the last 20 years, more can be done. 40 years still isn't a full life expectancy by any reasonable measure. That number can grow. The CF Foundation is currently funding research for better breathing treatments, more effective medications and ultimately a cure for the disease. Want to help us find a cure?

By raising awarenss, we will be adding tomorrows to the lives of people living with cystic fibrosis by raising money to fund research for a cure. Will you join Mason's Marchers? Support us by making a donation to our Great Strides fundraising campaign today! All gifts are tax deductible and walking is not required to make a donation. Come walk with us, we'd love to have you!

Our ultimate goal, and the ultimate goal of the CF Foundation as a whole, is to no longer need to ask for donations because CF will one day stand for "Cure Found".