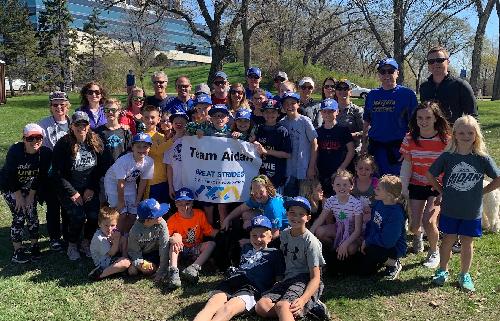 When Aidan was 5 days old, we received the news that he had Cystic Fibrosis (CF) - a genetic, life-threatening respiratory and digestive disease. When diagnosed in 2008, the life expectancy of someone with CF was mid-thirties. It is now over 45 and gaining every year. Thanks to your involvement and donation dollars, we can help add tomorrows for Aidan and every other person living with CF.

There are approximately 30,000 Americans living with cystic fibrosis. Cystic fibrosis (CF) is a life-threatening, genetic disease that primarily affects the lungs and digestive system. It is found in about 30,000 people in the United States. People with CF inherit a defective gene from their parents that causes a buildup of thick mucus in the lungs, pancreas and other organs.

In the 1950s, children with CF were not expected to live long enough to attend elementary school. Today, thanks to the many fundraising effots, approximately half of all people with CF in the United States are 18 years or older. The steady “aging” of the CF population reflects the remarkable progress that has been made in understanding and treating CF. Thanks to CF Foundation-supported research and care, an increasing number of people with CF are living well into adulthood and leading healthy lives, pursuing careers, getting married and having children of their own.

We walk for them. Will you join us? All we need you to do to become a member of our team is click on the "Join our Team" button. From there you can make a donation and start your fundraising.