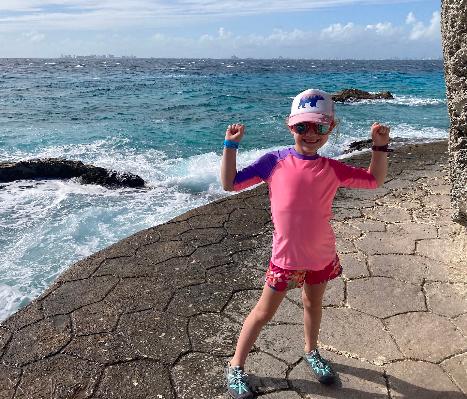 Drea was diagnosed at just a week old with Cystic Fibrosis, a genetic condition that causes the mucus in her lungs and pancreas to become thick and sticky, leading to lung infections, problems digesting food, and a host of other problems throughout the body. When Drea was just hours old, she had her first surgery to remove part of her small intestine that had become blocked. At 11 months old, she had her second surgery to remove the upper right lobe of her lung that had become infected beyond treatment. Since that time, we've been thrilled with her health and that excitement has been growing.

So far when I've written these annual updates, I talk about the treatment she has to do, the specialists we've added, the ups and downs. But this year is a little different. This year I get to talk about territory we've taken back from CF. Drea is doing so well. Her lung function is the highest it has been since she was a baby. She is down from 75 minutes a day of respiratory therapy to just 45 in the morning. She takes less medications. She is sick less often. I honestly didn't let myself believe that this would be the path we would be on, because I knew it would be too hard if it didn't happen. But from being a disease that gets progressively worse, we have turned in the other direction.

Thanks to the CF Foundation's laser-focus on taking big steps towards a cure, we can start to believe. Within the past year a drug, Trikafta, was approved for her age group. It is not a cure, but it is a wonder drug for those with CF who can take it. When Drea asks me if she'll have to do treatments when she's older, I can honestly tell her "probably not." When she asks if people are still trying to find a cure for her CF, it feels so good to unequivocally say yes, they are working very hard for that.

But, not everyone has access to Trikafta. There are some people with CF who it doesn't work for and they deserve a wonder drug as much as Drea does. Your donation to our Great Strides page will help the CFF continue that search for all who have CF.

Great Strides is a fun, family-friendly event that raises awareness and support for people with CF and their families. Help us reach our fundraising goal by donating to my Great Strides fundraising campaign. Your gift will help add tomorrows to the lives of people with cystic fibrosis by supporting life-saving research and medical progress. Your gift is 100-percent tax deductible.