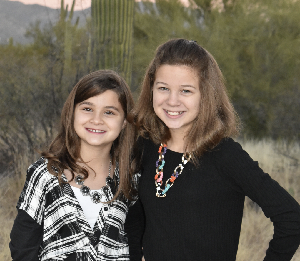 Sophia and Savannah BATTLE Cystic Fibrosis everyday.... It's not something you see when you look at them. On the outside, they look like normal, healthy, happy girls. On the inside, CF is silently filling their lungs with mucus, making it harder to breathe, and its wreaking havoc on their digestive systems. On a daily basis, the girls take between 36-42 pills, nebulize three different medications, and do two-thirty minute chest physiotherapy treatments. It takes getting up early in the morning, and it takes up their playtime at night. When they're sick, its double-time.

They have been taking Kalydeco for seven years now, which has opened our lives to new adventures. Where we were once scared of germs, we can now bravely go. While it hasn't been the miracle drug we anticipated, the girls have been healthier than kids with CF who can't take Kalydeco.

We had anxiously awaited the newest miracle drug, Trikafta, which was approved for their age group last year. Both girls started taking it at the end of July.  This drug has proven to be even more effective than Kalydeco, and it corrects the second genetic defect that the girls have.  It has been miraculous and life-changing for so many adults with CF.  Most people have seen huge increases in lung function and weight.  Unfortunately, our girls didn't see any improvement in three months, and actually had some pretty terrible side effects while taking the med.  We stopped after three months and decided to wait for the next medicine in the CFF research "pipeline".

Taking another medication, while helpful, isn't the end of this war for our girls. We will fight until we have a cure, so they can have as normal of a life as you and me. Without treatments, without handfuls of medication everyday, without the worry of being hospitalized with every cough.

The Cystic Fibrosis Foundation works endlessly for new drugs, therapies and treatments to help CFers in their fight, with the ultimate goal of finding a CURE!  We are so close!  Ninety cents of every dollar you donate does to research!!

We would love for you to join our Squadron and FIGHT CF with Sophia and Savannah!! Every person who comes to the walk gives the girls a glimmer of hope for the future. Every dollar donated in their honor helps them know that they are cared about and not alone in this fight. You're generosity gives them extra days to enjoy this beautiful life!!!

Thank you from the bottom of our hearts!
Bryan, Jackie, Sophia, Savannah & Truman