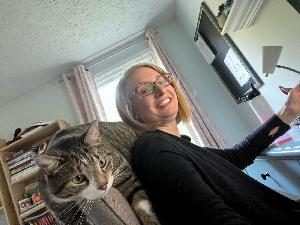 When I started at the Foundation 11 years ago, this organization already had the BEST story in medicine.  Life expectancy had increased from less than 5 years of age to the mid-20's.  The CF Foundation funded many drugs and therapies that allowed people living with CF to have longer, more fulfilling lives.  But the biggest change happened in the fall of 2019 with the approval of the drug Trikafta.  This drug is a HIGHLY effective modulator that can be taken by around 90% of people with cf.  The stories I've heard from people on Trikafta are amazing - they have come off transplant lists, decided to start families, and opted to attend graduate school.  All because this drug made them feel so much better and improved their lung function.

However, this amazing drug is not a cure.  And not everyone can take Trikafta. Many people with cf whom I love are still waiting for their miracle drug.  This year I am walking in honor of everyone with cf - those who can take Trikafta and are waiting for a cure - and those who can't and are waiting for their miracle drug AND a cure.  I also walk in memory of Paul, Mitch, Leann, Shannon, Lea, Danny, and all of those for whom this important breakthrough did not come soon enough.

Will you join me in fighting CF by making a donation to my Great Strides efforts?  The BEST story in medicine just got better!