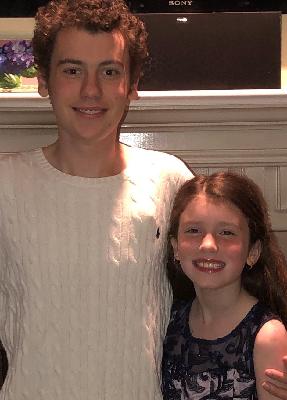 In 1999, we learned two of our least favorite words – cystic fibrosis. Tracy’s first born was diagnosed with this genetic disease and at the time, the life expectancy was early 30’s. We were devastated. Later that year we learned about the Cystic Fibrosis Foundation and the advancements being made in the treatment of CF. We knew we wanted to be a part of that progress, so we started a Great Strides Team – Brendan Bears. As Brendan added candles to his birthday cakes, the Foundation was adding years to the life expectancy of CF patients and we added walkers (and most importantly dollars) to the Brendan Bears Great Strides Team. We also added to our family in 2009, when Bella was born. She too has Cystic Fibrosis. However, by the time Bella was born, the life expectancy had climbed to the late 30’s. We could see that our involvement, along with the thousands of others raising money, was making significant progress toward a possible cure.

Bella has truly benefited from the advances in research for Cystic Fibrosis. She just had her 10th birthday and has not had any significant lung infections so far. On her most recent doctor visit, she was told that she should start chest therapies as a precaution. Her brother immediately talked with her about it and she is now excited to sit next to him while they both complete their necessary treatments and therapies. She has not only benefitted from CF research, but she also has been blessed with the best brother a girl could have.

Brendan’s daily routine consists of 4 hours of breathing treatments and chest therapies along with multiple IV therapies and 36 pills each day. He manages all of this in addition to attending college at the University of New Orleans, where he has made the Dean’s List for his first semester. Brendan says that being able to physically attend college is a dream come true for him after having been home-schooled for many years. In the next couple of years, Brendan will likely need a lung transplant. After an extensive search, we are traveling to Houston soon to meet the doctors at Baylor-St. Luke’s. Brendan is confident that this bump in the road of life with CF will not only add years to his life but also improve the quality greatly. Advances that have been made in medical research as well as improved therapies and more efficient surgical procedures, are all a direct result of donations. In other words, donations save lives and increase quality of life for CF patients like Brendan and Bella.

As always, we are hopeful that all of this is just temporary. Since July 2015, new medications have been developed that virtually reverse the effects of Cystic Fibrosis in patients with a specific gene mutation. Other medications have been developed that have greatly improved the daily lives of many other CF patients. Unfortunately, Brendan and Bella do not fall into either category. CF is a very complicated disease with over 1900 different mutations. We are hopeful that new drugs being developed will help correct the defect that Brendan and Bella have. The most exciting part is that those drugs could be available to them in a matter of years! The CF Foundation projects that within the next few years drugs could be available for 95% of CF patients including Brendan and Bella. This will allow them to live full lives with fewer pills, breathing treatments and hospital stays. Most importantly, the CF Foundation sees that people will be dying with CF, not of CF. We are on the cusp of changing what a diagnosis of cystic fibrosis means and the only way this is possible is because of the thousands of volunteers and millions of donors who support the CF Foundation through events like Great Strides.

We invite you to be part of our success by donating to our team or coming out to walk with us on Saturday, May 11th, at Audubon Park. Today, CF patients can expect to live well into their 30’s, 40’s and beyond, and it is because of the generosity of people just like you. For the last 17 years the word “CF” has been our least favorite word; but with your help, soon it will be our favorite as we make CF stand for CURE FOUND!