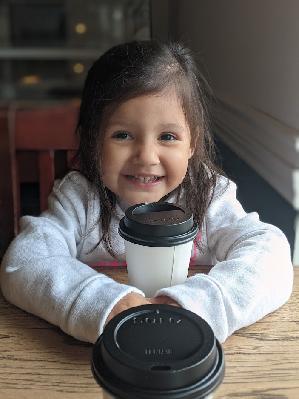 Mila was born with Cystic Fibrosis, a rare genetic disease that has robbed people of tomorrows – progressively limiting their ability to breathe and tragically shortening their lives. There are approximately 30,000 Americans living with CF.

The last few years, scientist have developed a better understanding of the genetic mutations that can cause CF. In 2019 the FDA approved the first triple combination therapy drug to help treat patients with the most common mutations, which is estimated to represent 93% of the cystic fibrosis population. While fantastic news for the CF community, there are 7% of CFers in the US that have rare mutations and aren't being helped by these drugs. Our Miss Mila is one of them.

The CF Foundation has promised that no one will be left behind and that they won’t stop until CF stands for Cure Found. I’m told that they are pouring in fundraised dollars to research for rare mutations. In October 2019, they announced that they are making a push to accelerate the pace of progress for drug discovery and development with the intent to allocate half a billion dollars to the effort through 2025. While their focus is on CF, its important to note that there are more then 1,000 diseases caused by similar mutations, virtually all of which have eluded researchers. mRNA, which was used to create the COVID vaccines is a promising technology that could give everyone with CF something to treat the underlying symptoms hopefully within the next 10 years. Other companies are working on genetherapy where they are using empty virus shells to deliver the correct DNA to the lungs. Lastly, a few companies are working on using something called CRISPR that cuts out the incorrect mutation and inserts the correct mutation essentially give a cure.

To say that this cause is important to us in an understatement. Currently estimates on average lifespan for CFers is early 40s. With classic CF and no current drugs available to help her, the research your contribution is helping fund could be the difference in Mila’s life being cut tragically short or her living a long life. The idea that she may not out live her old man bothers him greatly. Thank you for reading and thank you for any contribution you give.

We walk in Great Strides for her.

Great Strides is a fun event that provides a fantastic opportunity for family, friends, students, and colleagues to come together to make a difference in the lives of people with CF. We love having a large support team. By joining and sharing your personal fundraiser with a personal message to facebook generates funds that we wouldn't get on our own.