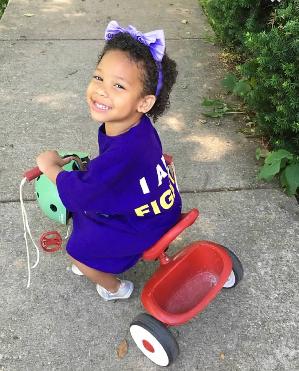 Aria was diagnosed with Cystic Fibrosis often referred to as CF during her newborn screen! Now Aria is four years old and getting bigger, striving to keep her healthy.  Cystic Fibrosis is a chronic genetic illness that affects many parts of the body.  A defective protein caused by a mutation in Aria's genes interrupts the flow of salt in and out of the cells, causing mucus that's naturally present in healthy people to become dehydrated, thick, and causes other problems with respiratory, digestive, and endocrine systems.  In the lungs, the mucus creates a welcoming environment for bacteria to expand causing illness faster than most which leads to more lethal bacteria to grow because clearing out the thick sticky mucus is hard and it can be draining on the body.  Infections inflammation and scarring can lead to respiratory failure. CF is a progressive disease which means it gets worse over time. One thing about CF is that it's a disease that attacks on the inside. Aria may look ok to most, and this is the frustrating part because people often perceive that nothing serious is goin on.  CF gives Aria the chance to look like any other healthy kid on playground. However, what people don't see is the pills she has to take before eating due to the affects of CF on her pancreas. She does breathing treatments and chest therapies to clear mucus, wearing a special vest that is set for her 30 minutes 3 times a day and more when she is ill.

Keeping her weight up is important too! Extra calories and extra salt is apart of her daily routine.  We couldn't do it alone. We have a great care team at Riley Hospital where we go to CF Clinic Care monthly. An amazing team of doctors, physical therapist, pharmacists, school and social service support, and dietary support.  We have had our moments of extended stays in the hospital for what is often referred to as a tune up. As a family we want to encouraged Aria to dream big and we strive to gain awareness and support for Aria and all those living with this disease. With the support of our CF Clinic, the CF Foundation, friends, and family we are hopeful that one day CF stands for Cure Found!

By donating to my Great Strides fundraising campaign your gift will support groundbreaking research, medical progress, and hopefully one day a cure! We will be walking and hopefully each step we take is a step towards a cure.
In addition to this, your gift is 100-percent tax deductible.

Become apart of our Aria's All-Star Team! Thanks in advance for your support! By becoming a member and or making a donation, you are joining a growing group of people committed to finding a cure for Cystic Fibrosis. Together, we are adding tomorrows to the lives of people living with CF