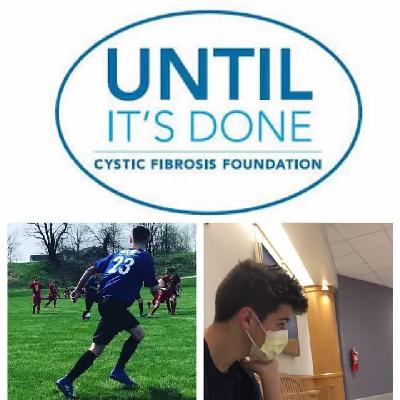 It’s so odd. Just yesterday, it dawned on me that Graham really hasn’t seen Ethan THIS sick before. He really hasn’t heard his brother cough on a significant basis like he used to. “CYSTIC FIBROSIS” is not a major word in his vocabulary. He hasn’t seen what CF can do enough to ask any major questions. He knows that Ethan does treatments, can’t do certain things, uses a vest for therapy...but he’s never seen THIS side of CF. And I don’t think it’s a coincidence...Ethan started Orkambi the day Graham got home from Riley, then switched to Trikafta 2 years ago...(which was just in time...because I could tell Orkambi wasn’t sustaining his health like it was the first couple of years).

We wouldn’t be here...to this place I have prayed for since December 11, 2003...if it weren’t for those medications. And we wouldn’t have those medications without research. And no research without the people that put so much time and money into The CF Foundation. SO...THANK YOU to those who have been with us, year after year. 17 years now!!! Wow!

WE ARE NOT DONE. And he is not cured. We still have a lot of work to do. He still fights for his health every day. And we STILL NEED YOU!!!!"

Your participation will help us get one step closer to ending this terrible disease. Let’s make CF stand for Cure Found.