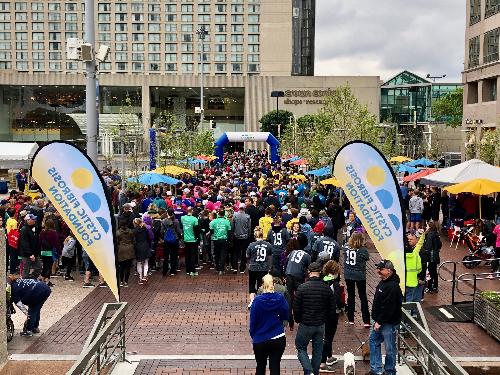 On Saturday, May 9th at Crown Center Square, I will put on (with the very BEST volunteer committee EVER!) the Greater Kansas City Great Strides walk!

When I started with the Foundation in 2012, I did not have a personal connection to cystic fibrosis (CF). But, over the past eight years my CF Fighters and their families have welcomed me into their lives & into their FIGHTS.  And, they FIGHT every day to beat this disease.

I join in their fight by personally raising money once a year for the Greater Kansas City Great Strides walk.  It is the Heart of America Chapter's largest fundraising event. The money I raise helps people like Alex, Morgan, Erik, Audrey, Jack, Anna, Elliott, Amelie, Paige & Sarah FIGHT because it funds vital research. The Foundation's steadfast commitment to advancing CF research has helped enable more than a dozen new treatments for the disease. 2019 was a ground-breaking year for the CF Foundation and our FIGHTERS! The FDA approval of Trikafta has been a game-changer for 90% of our CF population.  But, the Foundation remains committed to making sure the 10% who remain with rare & nonsense mutations will have effective treatments as well.  We will not stop UNTIL IT'S DONE.

Would you consider donating to my team to show your committment to making CF stand for CURE FOUND?

Wanna do more than just donate??? VOLUNTEER!  Contact me if you would like to donate your TIME on Friday, May 8th or Saturday, May 9th!  I'll throw in some food & a FREE t-shirt!  PLUS, my undying gratitude!

Cystic fibrosis is a progressive, genetic disease that causes persistent lung infections and limits the ability to breathe over time. People with CF have inherited two copies of the defective CF gene -- one copy from each parent. Both parents must have at least one copy of the defective gene. Cystic fibrosis is a complex disease and the types and severity of symptoms can differ widely from person to person. Many different factors, such as age of diagnosis, can affect an individual's health and the course of the disease. Tremendous advancements in specialized CF care have added years and quality of life to the lives of people with cystic fibrosis. There have been dramatic improvements from the 1950s, when a child with CF rarely lived long enough to attend elementary school to today, with many living long enough to realize their dreams of attending college, pursuing careers, getting married, and having kids.

I hope you'll join me either by donating your money or time to my amazing CF Fighters!