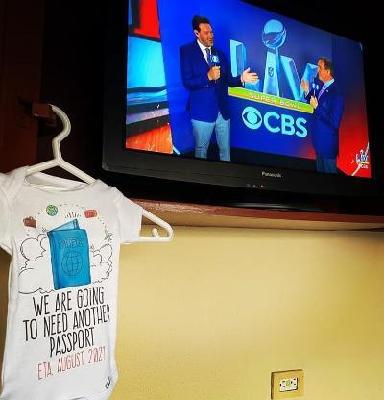 We are sharing great news as Ali and Bobby have announced the arrival of Baby O' in August.

On Sunday, May 16th the CF Foundation will hold a national virtual Great Strides walk to celebrate the it’s 65th anniversary. As you know, our 33 year-old son, Bobby faces a daily battle against this deadly disease.

Cystic Fibrosis is a chronic, progressive, genetic disease which affects the pulmonary and gastrointestinal systems. Bobby has experienced disease rogression over the last couple of years but since he started Vertex’s Trikafta his lung function has climbed 14 points from baseline, he has gained 22 pounds, has now cleared the thick mucus in his lungs, has stopped coughingand has more energy, which he will need.

We are so grateful to everybody who has contributed. The32 years of walkathons has yielded this medical miracle. Although this drug is not a cure it corrects the basic cell defect by creating a more normal condition in CF lung cells and other organs such as the pancreas.What this drug can’t do is reverse the historical lung tissue damage caused by the chronic and intractable infections and cycles of inflammation that are the hallmark of CF.
Our work is not done.The CFF has committed $100 million to infection research a bold initiative committed to reducing infections amd pulmonary exacerbations. We need to develop new anti-inflammatory drugs, new anti-invectives to attack these Multi-Drug Resistant(MDR) pathogens that colonize the CF lungs. The Infection Research Initiative will take a broad approach to advance drug development into all CF-related micro organisms including NTM disease in CF patients.
Your continued support during these tough economic times is urgently needed to complete our mission to successfully defeat CF, our nation #1 genetic killer of children and young adults. Please join our team by donating on line. Or you can Mail a check to Maryann O'Mahony, 812 Imperial Drive, Baldwin, NY 11510