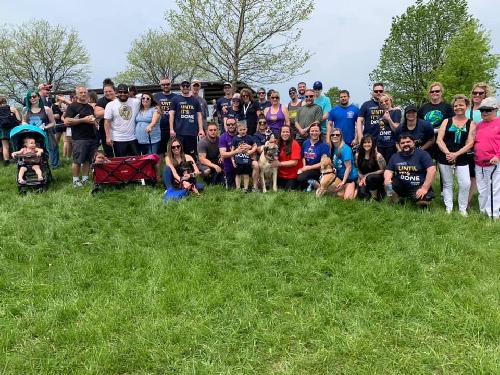 For those who don't already know, my husand Ryan was born with a genetic, terminal lung disease called Cystic Fibrosis. Around this time, anyone living with CF wasn't expected to live much past the age of 18. Luckily with development in new medication over the years, that age is now in the 40's. Cystic fibrosis causes sticky mucus to fill up the lungs, making it difficult to breathe. Imagine breathing through a straw for the rest of your life. That is what it feels like for someone with Cystic fibrosis to breathe, every. single. day. Sadly, this slows their lung function, which often leads to anyone suffering with this disease needing a lung transplant.

Cystic Fibrosis affects other parts of the body as well. Because of CF, Ryan has been diagnosed with Cystic Fibrosis related diabetes, which causes him to need insulin for the rest of his life. He now has chronic sinusitis, leading to his first of possible many sinus surgeries. Approximately two years ago, Ryan had to have his gallbladder removed as he began having issues with that as well.

Whenever Ryan gets sick with something as minor as a cold, it often leads to something much more serious. Throughout his life he has had to spend countless nights in the hospital for weeks at a time, and once released he still needs to be given IV antibitocs from home for an extended amount of time.

Every day Ryan spends hours giving himself medications and multiple forms of breathing treatments. You would think after all he has endured in his life, he would become bitter or have a "why me?" attitude. Anyone who personally knows Ryan, knows he has the most positive outlook on life. He lives every day to his fullest and he refuses to let this disease define him.

Sadly, THERE IS NO CURE.

However, we had what feels like a miracle in 2019. The FDA approved a new medication called Trikafta which Ryan among many other Cystic fibrosis patients were eligible to begin taking. After a month and a half of being on trikafta, Ryan has gained half a liter of lung function! It has increased 17.5%! (Which is only 3% off of "normal" lung function compared to someone at his height and weight!) His lungs have not been this great since 2013. The hope and happiness this has brought to our lives is indescribable.

Although this feels like we are won the fight, we have not yet. Over the last 9 years I have tried to do my part in raising money to help us get even closer to finding a cure. EVERY SINGLE DOLLAR raised goes straight to research. From the bottom of our hearts, thank you so much to everyone who has helped us in the past. Because of you, we are that much closer to ending the daily struggle for all of those fighting this disease. Please consider helping me fundraise, donating (no amount is too little!), or joining us May 16th at the annual Great Strides Walk. It's free to walk! :)

Thank you, Thank you!