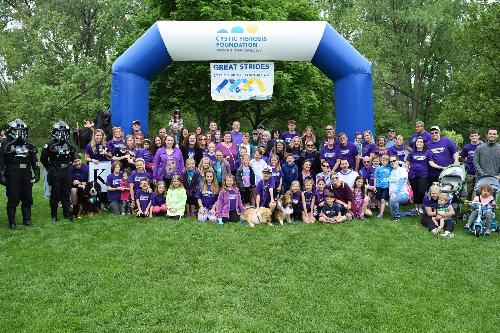 Hello! We are walking for our son Nathaniel. He is twelve years old with Cystic Fibrosis.

2019 was an amazing year. Nathaniel had been involved in a clinical trial of a drug that resulted in substantial weight gain, however he hadn’t responded as well as we had hoped with regards to respiratory function. When his trial ended we elected to voluntarily extend his enrollment until the time when the drug received FDA approval. We let Nathaniel make this decision himself, and it was a great piece of life experience for him having to consider all the pros and cons and come to a decision on his own, though we suspect getting multiple days off of school to visit the friendly staff at Riley Hospital in Indianapolis, coupled with dinner at his favorite steakhouse St. Elmos may have made the decision easier.
Then, in late 2019 the CF Foundation announced that the “miracle” drug, Trikafta had received FDA approval and was being released immediately. This was not the one that Nathaniel was on the trial for, but it was clear that he needed to discontinue the trial and start on this new drug immediately. Nathaniel was the first to start on the drug at our clinic, and the results are nothing short of amazing so far. On just the second night of taking the Trikafta he coughed up some of the most disgusting mucus we have ever seen; it filled the bottom inch of a solo cup. He had his first doctor visit just two weeks after starting this new drug, and his lung function had increased 15% from 78% to 93%.
While this isn’t a cure, it is promising to hear that there is discussion in the medical community that this drug may mean an end to the need for breathing treatments, enzymes with meals, and lung transplants. This would mean Nathaniel could live a more normal life, without many of the effects of CF bringing him down. This is the direct result of YOUR donations, and they have affected so many others too. But, there are still plenty of others with slightly different mutations of CF who do not see the same results.
Nathaniel just wants to be a "normal" kid that can play, eat without medicine, and NO more breathing treatments. He deserves to breathe just like you and me!

There are approximately 30,000 Americans living with cystic fibrosis. They are moms, dads, sisters, brothers, daughters, sons, friends and co-workers who struggle every day just to breathe. We walk for them and hope you will support us in our efforts.
Real progress has been made in the search for a cure, but the lives of people with CF are still cut far too short. There still is no cure for this devastating disease, but there are drugs on the horizon to control it. Ninety cents of every dollar donated funds research towards finding a cure.
By walking today, we are helping add tomorrows to the lives of people living with cystic fibrosis. Will you join us? Support Nathaniel by making a donation to our Great Strides fund-raising campaign today!

Great Strides is a fun, family-friendly event that raises awareness and support for people with CF and their families. Watch Nathaniel's YouTube video visit https://youtu.be/ClrXcxgW_mE