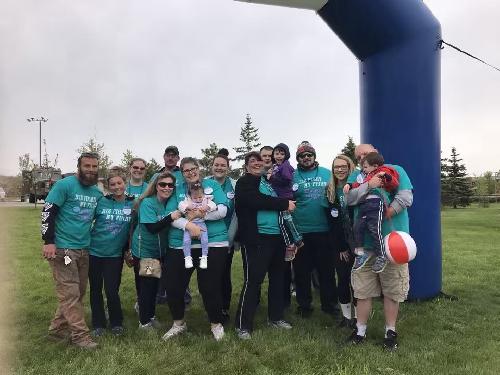 Dylan was diagnosed with Cystic Fibrosis in December 2014, after spending the first two months fighting in the Neonatal Intensive Care Unit (NICU) due to his nine week premature arrival.
After his initial diagnosis, Dylan's symptoms were primarily digestive. Dylan began taking enzymes in order to digest his food properly. As Dylan grew and his daily caloric needs increased, so did the dosage of enzymes. Dylan needs to take 16 pills a day, just to digest his food. That's 5,762 pills a year just so he can eat.
In addition to his oral feedings (eating normally), Dylan also receives 2 bottles of a special formula each night through a feeding tube surgically placed in his stomach. Despite our best efforts, Dylan just couldnt gain enough weight on his own, which is why our team of doctors decided the best option for Dylan was a g-tube.
Cystic Fibrosis also damages the lungs. Most patients receive annual chest xrays to keep an eye on the damage and scar tissue forming. When Dylan was born, he received a baseline chest xray. After his first birthday, he  got his annual xray. The amount of scarring and damage that developed over his first year of life was surprising because it is usually associated with an illness, and Dylan had never been sick up to that point. Our doctor ordered an additional xray that was taken in August 2016. Once again, more damage was seen in the xray still despite no additional sickness. Dylan began using an inhaler twice daily to ensure his airways were open. This past February, Dylan had his regularly scheduled annual chest xray, and once again additional damage and scarring was seen. Our pulmonologist made the decision to begin daily nebulized breathing treatments to help prevent additional damage from developing.
In addition to his inhaler and nebulizer, Dylan also undergoes Chest Physical Therapy, or CPT twice a day. Each morning and before bed, Dylan puts on a vest that inflates and shakes. This helps break up any mucus trapped in his lungs so he can effectively expell it by coughing.
All of these treatments are what Dylan does to stay healthy. If Dylan gets sick, the number of medications and treatments only increase.
As in true warrior fashion, Dylan has fought strongly since day one. Dylan takes each of these treatments in stride. They are his normal, and while there are some hard days, most days they don't phase him. We are so proud of our little warrior.

With your help, one day CF will stand for Cure Found.