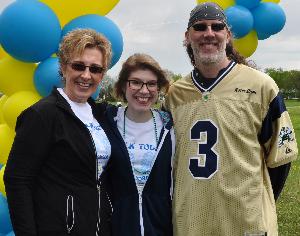 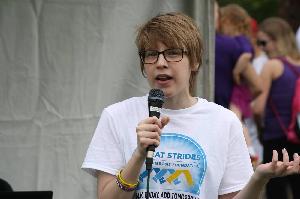 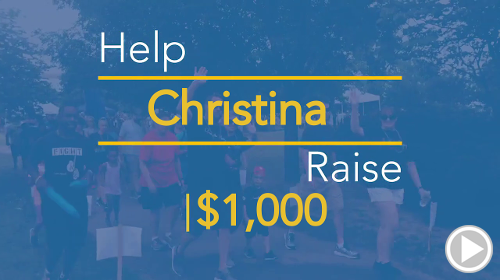 Family and friends, this past year I experienced both the highest of highs and the lowest of lows. Parts of this letter may be difficult to read, but transparency is the only way you can begin to understand the full spectrum of this disease.

Right before the CF walk last year, I started physical therapy for pain, stiffness, and limited mobility in my chest and upper back. I attended PT sessions twice a week for a month, and while I experienced pain relief almost immediately, the most exciting improvement was in my lung function. By the time I was discharged from PT, all of the numbers on my pulmonary function tests (PFTs) had increased significantly and were the best they had been in months. I was able to breathe easier, have more productive coughs, and started rebuilding some of the stamina I had lost after months of not feeling well. Then in June, I finally received a new piece of equipment that I had been waiting on for months: a new therapy vest called the Monarch. The Monarch is a wireless vest that looks (and feels) kind of like a jet-pack; there are eight individual pods, four in the front, four in the back, that target the top and bottom lobes of each lung. Even though it’s not the most comfortable device (it weighs thirteen pounds), it’s definitely an improvement from my old vest; I feel like the pods make my treatment more effective because the therapeutic vibrations are concentrated directly on the areas that need it, my treatment sessions are twenty minutes as opposed to thirty, and I’m no longer connected to a machine.

In last year’s letter I mentioned that I had a bronchoscopy done in April because my doctors were suspicious of Allergic Bronchopulmonary Aspergillosis (ABPA), a condition that most often occurs in patients with CF or asthma; it’s a hypersensitive immune response to the fungus Aspergillus, which can be found in soil. After almost eight weeks of waiting, the results came back somewhat inconclusive; the numbers weren’t significant enough to warrant treatment from the CF clinic, but my ENT decided to put me on an antifungal for two weeks to see if it helped any of my symptoms. Unfortunately, I didn’t see much improvement, so the best explanation for my increase in symptoms was a general worsening of my CF due to age. While I certainly didn’t want something else wrong with me, I also wasn’t ready to accept the increased cough, shortness of breath, and fatigue as my new normal.

Thankfully, my family and I had two trips planned to keep me motivated and in good spirits. In July, we took a long weekend trip up to Wisconsin where we stayed in a house on yet another beautiful lake, visited with friends (who have a dog that’s the same breed as Ellie!), and the highlight of the trip for me: a tour of Lambeau Field with my dad! Then, in September, we journeyed to Minnesota where my dad and I realized a lifelong dream: we attended the Vikings’ season home opener! AND THEY WON! Our seats were fantastic, and thanks to the CF Foundation, we were also gifted VIP passes so we could be on the field for a couple of hours before the game. It was an incredible day, and a memory I will cherish forever.

Even though our trips provided a welcome and much-needed distraction, it was only temporary, and for most of the fall and winter my body and mind were increasingly preoccupied with my dwindling health. First, my GI symptoms: significant pain, nausea and bloating, alternating bouts of constipation and diarrhea, an increase in my reflux symptoms, and occasional vomiting. I started acupuncture in September which helped take the edge off, but the benefits weren’t long-lasting. In October, an X-ray of my abdomen coupled with my worsening GI symptoms led to a brief hospital stay for another endoscopy and colonoscopy with biopsies. The results came back normal, and then we had to turn our attention to my lung symptoms: chest pain and tightness, increased cough and sputum production, shortness of breath, and trouble breathing. Wanting to avoid antibiotics, my doctors decided to once again increase my Prednisone dosage; I had managed to decrease my dose to 20mg per day, but now I was back up to 40mg. By November I wasn’t feeling much better, and my doctors thought antibiotic treatment was needed. Since I’ve reacted to so many medications in the past, I had allergy testing done to see if there was an oral antibiotic I might be able to tolerate instead of IVs. The allergy testing was a rather positive experience; the results showed that I should be able to tolerate Penicillin-type antibiotics, so I was put on a two-week course of Augmentin. I finished the Augmentin right before Thanksgiving, and I was starting to feel a bit better; unfortunately, my mom got an upper respiratory infection in December then passed it on to me (despite diligent hygiene practices)! I started another course of Augmentin just a couple of days before Christmas, and both my mom and I spent the holidays recuperating. The New Year didn’t bring much of a change; I spent January and February trying two different corticosteroid inhalers in the hopes of decreasing my Prednisone dosage, but I kept getting thrush in my mouth and throat, so I had to stop taking them. Then, on February 20, I had a pharyngeal manometry and 24-hour pH impedance study done to assess my reflux symptoms; I’ve had this test done once before and it is extremely unpleasant. The test is completed in two parts; the first part is the manometry where a tube travels up the nose, down the throat, and into the esophagus. Once the tube is placed, I went through several swallowing exercises, first in a reclined position and again in an upright position; next, I had to eat a meal and then wait for about twenty minutes afterward to see if I had any reflux symptoms. This whole process took about an hour. For the second part of the test, the initial tube is removed and then a smaller tube travels up the nose, down the throat, and comes to rest in the stomach where it remains for 24 hours. I left the hospital with the tube taped in place on my nose, a receiver around my neck, and instructions to go about the next 24 hours as normally as possible. I had to press certain buttons on the receiver to record when I ate, drank, slept, and had symptoms. Those 24 hours were difficult; the tube was much more irritating than I remembered from the first time, and I threw up my entire dinner. Fortunately, I was able to complete the test, and I was hopeful that the results would be able to explain some of my symptoms. While the results did show evidence of reflux, my doctor said that my current medication and dosage are appropriate and should be enough to control my symptoms, so rather than play around with medication, he recommended evaluations with two other members of the GI team: their dietician and cognitive behavioral therapist.

The combined effects of my GI and lung symptoms left me constantly exhausted, but no matter how much I rested during the day or how many hours I slept during the night, I still couldn’t find relief. I had no appetite, and my weight continued to drop to dangerously low levels. It took an incredible amount of effort to motivate myself to do the simplest tasks, and activities that I had previously enjoyed, like taking Ellie for a walk or sharpening her service dog skills, felt like more than I could handle. I’m just going to come out and say it: I was deeply depressed. I’ve struggled with depression before, so I take Zoloft daily and see a therapist regularly, but this was the worse period of depression I’d even experienced. In the midst of these dark months, I would often say to my mom, “I’ve been depressed lately,” as if saying the words out loud would be enough to make it go away. I wasn’t in denial, but I also wasn’t trying to dig myself out of the hole; I was tired of everything requiring so much effort, and I think I was hoping to just wake up one day and feel better. But depression doesn’t work like that, and in April, my mom gave me an ultimatum: I had thirty days to start gaining weight, otherwise I was getting a feeding tube, and I had to start meeting with my therapist weekly. I also started taking CBD oil, and while I haven’t found the right dose yet, I can definitely say it is having a positive effect.

Managing my Cystic Fibrosis has become my full-time job, and I don’t like it. To be honest, I kind of resent it. My daily routine is monotonous and isolating, and it’s getting harder to find the energy to keep up with it. I want a cure, but I need a drug that will target my genetic mutations and eliminate my symptoms. Your support has brought us closer than ever to reaching that goal. By the end of this year, a drug will be available for CF patients who have at least one copy of the Delta F508 mutation; their second mutation doesn’t matter. This means I will be able to take this drug, and even though it’s not specifically targeted for my second mutation, it still has the potential to benefit me. Your help is more critical than ever now; there are several drugs in the pipeline that could significantly improve my daily life, and the more money we raise, the quicker those drugs reach the people that need it most.

This year, the Great Strides Walk to cure Cystic Fibrosis will be held on Saturday, May 18th at Busse Woods in Schaumburg. We will be at Grove #28-30 off of Golf Rd. Last year, Team Christina raised over $73,000 and surpassed $1 million in lifetime fundraising! Also, in the future, if you would prefer to receive this letter via e-mail, please include that information along with your donation or e-mail us. Even if you can’t join us, you can still contribute in the following ways:

2. Mail a check payable to the CF Foundation to:

3. If you work for a company that has a Matching Gifts program, we would be very grateful if you chose to make your donation that way.

Cystic Fibrosis is a harsh disease, one that effects not only the patient, but also those closest to the patient. It’s exhausting, but we refuse to give up. Thank you for continuing to support us, especially when it’s hard.