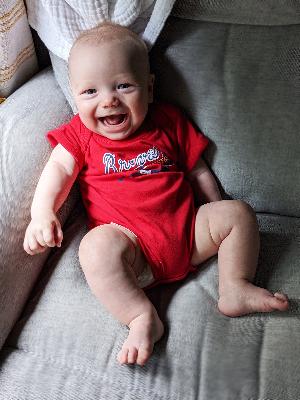 When Sidney was 10 days old and Meg and I were deep in the joy, adoration, and fatigue that comes with being first time parents, we received a call from the pediatrician's office. We were told that, regarding Sid's newborn screening test, there was some bad news - it appeared that he had the genetic mutations that cause the disease Cystic Fibrosis. We weren't familiar enough with CF to understand exactly what this meant for us, so with fear gripping our hearts we did what anyone would do - we got out our phones and started googling. After reading a few articles, we each determined independently that yes, this was indeed bad news.

In the days and weeks that followed, we met with his care team at the CHOA Center for Advanced Pediatrics and began our education on what CF is, and what it means for Sid. The first month of his life was punctuated with a 7 day stay at Egleston hospital, where he arrived via ambulance with an oxygen tank in tow, due to a still undetermined virus that caused difficulty breathing. His weight dropped, and during his first few months his treatment regimen was taxing for all three of us. Add in the backdrop of a pandemic disease that affects the respiratory system, and you could say that we had some serious peaks and valleys as we got to know our son.

But Sid did what we hoped he would do, with the support of a very loving family and great care team - he bounced back. Sid is thriving - his weight is up, his breathing is great, and his treatment regimen is down to a very manageable 2 hours of physical therapy, plus various medications and digestive enzymes throughout the day. CF may have dominated these first few months of Sid's life, but as his parents, we want to make sure this disease doesn't define him. To that end, we need your help. There's no cure for CF, but scientists are making significant strides in the right direction. Given some of the advancements in recent years, there is true hope that we'll see the disease eliminated, or significantly reduced in severity by the drugs that may be in development even as I sit writing this.

By joining our team and supporting us through Great Strides, you are directly funding the research and development that will add years to Sid's life. So dig deep and help Sid, and everyone else fighting against CF. It may be your donation that delivers the knockout.