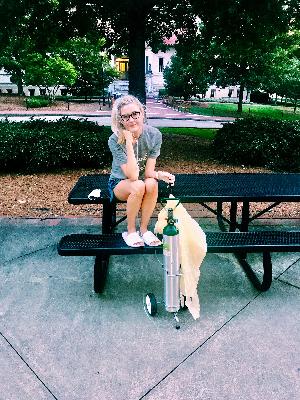 Hey Everyone! This team is dedicated to helping raise money, support, and awareness for the Cystic Fibrosis Foundation in honor of our CF fighter, Holly Seay!

A little Cystic Fibrosis knowledge. CF is a chronic and terminal genetic disease that affects all organs of the body. The CFTR gene is defective causing salt to not regulate properly throughout the body. This causes thick sticky mucus to form and clog up all of the body's organs: mostly the lungs, pancrease, and sex organs. In the 1980's life expectancy for a CF patient was less than 20 years old. However, with treatment and medical advances that number keeps getting better and better. The current life expectancy for someone with CF is in the mid-30's.

Holly is in her 25th year of fighting Cystic Fibrosis. In the past couple of years, her health has taken more hits than can be counted. Her lung function has taken huge drops that she has been unable to ever fully recover from, more hospital admissions than should happen in a lifetime, losing 30 pounds resulting in getting a feeding tube for weight gain, CF-related diabetes issues, requiring home oxygen, pulmonary rehab, leading her to being months away from being referred to the Lung Transplant team. However, with new gene modifiier drug, Trikafta, her health has finally made a turn around and not only stabilize, but improve in ways no one could have ever imagained. Trikafta was only made possible by the generous donations of all of you! Even with all of the improvements, Holly is not cured of Cystic Fibrosis!! Even more, there are still 10% of the CF population that are unable to benefit from gene modifiers.

Because the Cystic Fibrosis Foundation recieves zero government funding, every dollar that you donate means the world to all of us in the fight for curing Cystic Fibrosis!

Because of this we would love for you to join our team, Holly's Hope! Without your support, the CF Foundation will not have money to continue the research that will be able to prolong her and other CF patient's lives! Together we can make CF stand for Cure Found!