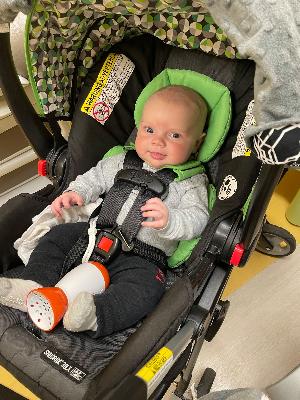 There are approximately 30,000 Americans living with cystic fibrosis. They are moms, dads, sisters, brothers, daughters, sons, friends, and co-workers who struggle every day just to breathe. By making a donation, you are joining a growing group of people committed to finding a cure for cystic fibrosis. We will not rest until all those with cystic fibrosis have a cure. The time is now. Together, we can conquer this disease.
Our affiliation with CF came unexpectedly in 2018 when Patrick and Scarlett were in the midst of their journey to become parents. After extensive genetic testing, we found out that Patrick has a rare combination of mutations of cystic fibrosis. We are blessed that Patrick has lived a healthy life and is now doing regular treatments to continue to maintain his health. However, our quest to help others who are fighting CF began!

The Great Strides walk is once again virtual this year, but we still want to do our part to raise funds. We have a new CF hero that we want to focus on this year.  He is our new friend James Chitty. Here is James' Story (told by his sweet Mommy, Brandi Chitty):

At 10 days old, we were told James had abnormal bloodwork & needed to go into the office. I think they wanted to break the news in person, but I asked more questions and found out over the phone that his bloodwork pointed to Cystic Fibrosis but they didn’t have the official results...so bring on a night of worry and (the terrible) Google. We went to the pediatrician the next morning and got the results that James has two CF mutations - the pediatrician was coached by Children’s Healthcare of Atlanta on what to say and set us up with the CHOA Pulmonary group for the next morning. The next day, James’ 12th day of life, we spent 3.5 hours learning more about CF and getting James checked out with his new care team that we will see monthly for the foreseeable future. We started him on medicine & salt before each nursing session and a daily special CF vitamin (that he hates).
His mutations point to severe pancreatic insufficiency & test results already have proven that is the case which is why he is taking the medicine (enzymes before each meal). He was officially diagnosed with CF at just shy of 2 months when he and his sister did their sweat tests (James had to gain a few pounds to take it). Thankfully, Savannah does not have CF. No one in our families has had CF that we know of, but apparently, he got a mutation from me and one from Adam. During each visit with his care team, we learn something new - the first was the enzyme medication, the second was Chest Physical Therapy that we do for 20 minutes twice a day, and the third we got his nebulizer for when he needs it. At the next appointment, they will do chest X-rays and lab work to have a baseline.
The good news is this is a well-funded & well-researched genetic disorder. The doctors are positive & helpful. We caught it early. He’s growing and gaining weight - which will possibly/most likely be one of his biggest battles in life (retaining good nutrients). And most importantly God is in control.

From Patrick to the Chitty family:
My diagnosis has certainly opened my eyes to this illness that can and will be overcome. James is a strong boy and combined with the help of the amazing CF community I am more convinced every day he will live an amazingly long and fulfilling life.
I know you are new to the CF family as I still am as well, but every year there is a CF walk to help raise money for CF research. The research and advancements, most notably Trifakta, that have been made adds so much promise to a potential cure for cystic fibrosis. I am excited by that news less for me but more for the many children that have been impacted from day 1 that may never have to know the real impact of this disease if we can continue to push. In order to do our part, we have a team we have started putting together 2 years ago to help raise money. My story is not important as there are so many impacted that can continue to encourage others to speak with their wallets wherever possible to help us all get over the finish line. This year Team Sugar is excited to sponsor sweet James and highlight his story in an effort to motivate and educate others to help us raise money for research and continued progress.