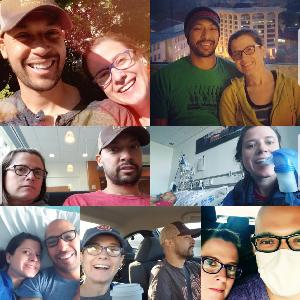 Ah, another year, another Great Strides. Do my words convey exhaustion? When I rebooted this page for 2020, last year’s write-up had automatically carried over. As I read the text, I could feel my enthusiasm jumping off the page. At the time, I was very excited about a cystic fibrosis drug that was in Phase 3 of its clinical trial. Though I couldn’t share this publicly, I was on the drug and having the best health days I could recall. Less than a week after my first dose (which I enthusiastically took on March 20, 2019), I could feel my body – especially my lungs – beginning to work properly. I touted it as a miracle and felt my life shifting before my very eyes.

In mid-April of last year, after four weeks on the drug, the study doctor called to let me know that my liver enzymes were slightly elevated. There could be many non-drug-related causes for this, so we weren’t overly concerned, but we agreed to retest my liver values within the next two weeks. My birthday was at the end of April, and I felt there was truly reason to celebrate life. I went for lab work, and the next day, Thursday, May 2, I received news that would break my heart: I had to discontinue the drug. My liver enzymes had reached nearly 10 times the values they should be, which could quickly result in liver injury. I was too surprised to cry that night. I couldn’t believe that I could be feeling so great, yet my liver could be failing me.

I gave myself permission to sulk over the weekend, and sulk I did. I was so disappointed that, after waiting what felt like forever for a drug that would apply to my specific CF mutation, I got it, reaped the benefits for a short time, and then had it taken away. For most of my life, I’ve been tirelessly advocating and fundraising, all with the hope that I would one day be able to breathe effortlessly. That day came, and that day went. I was downtrodden and discouraged, but I knew I couldn’t stay in that place forever. Then life got extra clever.

My husband, Ramón, went to the doctor the Monday after my weekend-long, stay-in-bed, why-can’t-I-just-have-a-body-that-works pity party. The routine visit was prompted by a new and improved health insurance plan, though Ramón began feeling more tired than usual leading up to the appointment. The day after the doctor's appointment was Ramón's birthday. Woohoo! *birthday dance* Not so fast. Before we could even make a dinner decision, we received an unexpected surprise: a call from the primary care doctor saying to go to the emergency room. By the end of his birthday on May 7, 2019, Ramón was gifted with a leukemia diagnosis, and we were in the running for Relatively Young Couples’ Worst Health Week Ever.

Ramón was transferred by ambulance to Emory’s main campus to begin treatment for Acute Myeloid Leukemia (AML), so we found ourselves living at the hospital for nearly a month. During this time, the doctors were running test after test on my liver. They were partly hoping to find an underlying and treatable liver condition that was causing the elevated enzymes, but they also wanted to verify that no long-term damage was caused. You know how to save money? Wake up and walk to appointments in your pajamas. You know how not to save money? Cancer. All the testing confirmed that my liver was perfectly healthy and that I was indeed dealing with drug-induced liver injury.

After last May’s leukemia diagnosis, Ramón did one round of induction chemo, got into remission, did four more rounds of consolidation chemo, and confirmed his remission status through multiple bone marrow biopsies. We were so grateful that our cancer chapter might be drawing to a close. Then, in February of this year, we learned he’d relapsed and that our cancer story wasn't yet fully written. So, we packed our bags for a 28-day stay in the hospital. Ramón has since done two more rounds of chemo and one round of radiation, all leading up to his re-birthday on April 10, 2020, via a stem cell transplant of his sister YuSun's cells. Woohoo! Hopefully we're on the road to having only one incurable disease in our family of two humans (and three dogs).

Edited to add: Nine days after Ramón's transplant, he went into cardiac arrest after suffering from some airway complications. Since April 19, 2020, he has been on a ventilator in the ICU. A long road just became even longer, but I'm doing my best to shine some light in this world even during a very dark time for me. Given the COVID-19 situation, I can't be with Ramón in person, so I'm doing what I can to stay optimistic while I wait. This, as always, is a good avenue for that.

So, this is where we could use your assistance. I’ve always had a difficult time asking for and accepting help, but the past year has turned me into a bit of a professional. Though it was challenging at first, I’ve learned that we can’t shoulder all of this alone. I’ll admit we’re getting pretty stinkin' good at handling adversity, but we want to believe there will be a time when we’re both healthy at the same dang time. There are so many CF therapies in development, and I am certain one of them has my name on it (and my liver’s). We just need a bit of soul rejuventation to get from here to there, and that's why we continue to do our part to raise money for a cure. We appreciate you all for being a part of our extremely depressing, yet somewhat hilariously unfortunate, story.

Have I mentioned we met at a comedy show? Also, if anyone's looking to write a screenplay for a Lifetime or Hallmark movie, we're happy to discuss.