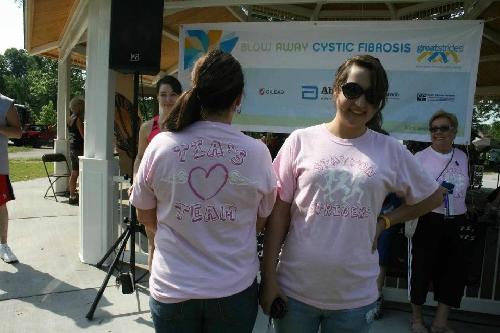 Welcome to the Stayton Strider's page. This year's Great Strides event marks our 30th year raising funds for the Cystic Fibrosis Foundation. We formed our team in May 1991 in honor of my youngest daughter Tia. Can you believe it?! We were blessed to have Tia walk with us for 23 years.

This year's "walk" is significantly different. It will be virtural, with a pep rally on May 16th and a national rally / "walk" in June. COVID19 has brought a cf family's reality to the entire world. We feared germs everyday, 24/7, 365 days a year. Something as mild as a common cold virus could rapidly spiral a CFer into servere lung infection.

The FDA approved a new drug, Trikafta, which has had life-changing results for the majority of the CF community. Patients have experienced huge lung function improvements, greatly improved nutrient absorption, gained energy and some were even able to discontinue insulin if they had CF related diabetis (like Tia did).

Trikafta is not a cure and still has some bugs to work through. Also, there is still not enough treatments for the CFers that do no have the gene type required for Trikafta.

As many know, Tia battled Cystic Fibrosis her entire life. She spent her first week of life in SSM Cardinal Glennon Hospital and was diagnosed at two weeks old. Tia had mild illness we could treat at home until she turned 16; 2007 was her first hospital admission and the year she developed CF related diabetes. In 2009 Tia became gravely ill and began frequent hospital stays. By the end of '09 (at age 18) she was facing the most tumultuous time of her life. Tia was admitted to the hospital on December 30th 2009. Her lung function was barely at 40%. It was decided the best option for Tia to be able to get healthy was to remove her upper right lung lobe. Tia had surgery on January 13th, 2010. The lung surgery was by far the scariest hurdle to come our way thus far. What was supposed to be a 3-4 hour surgery, turned into 7 agonizing hours. We nearly lost Tia during the operation. By God’s good grace, He decided Tia still has work to do on earth. She spent a total of 24 days in the hospital during this admittance.

She had about a year and a half of significantly improved health and lung function. The beginning of 2012 Tia began declining again adding CF related liver disease to her issues. Her hospitalizations became even more frequent, and home I.V. treatments became just part of our daily routine. Throughout all of this, Tia persevered. She continued to work part-time, hang out with friends and go to college full-time.

After Tia passed away on November 25, 2013 (at age 23), I found an email she wrote to a professor. She was asking for extra credit assignments to salvage her grade. The email was dated five days before she departed for heaven. Tia was an incredibly determined person, who loved life and most of all her family.

Cystic fibrosis is an extremely complex disease; the types and severity of symptoms can differ widely from one person to the next. This disease is unpredictable and overwhelming. The lives of CF patients can be vastly different. There are some that live far into adulthood with minor health issues; some require lung or liver transplants in order to continue living, and some, like my daughter have their life end far too soon.

I am frequently asked why I still support the Cystic Fibrosis Foundation. My answer is simply because a cure has not been found yet and there are many patients who need one. I care deeply for the other CF families.

CF patients are daughters, sons, aunts, uncles, parents, friends, co-workers; they are regular people just trying to breathe. The Stayton Striders walk for not only the CF community but in memory of our Tia.

You can help keep Tia's memory alive and help the 30,000 other CF patients by donating to the Cystic Fibrosis Foundation. Your gift is 100-percent tax deductible and will help sustain research and medical progress.

Tia would not give up without a fight, and neither will I. On behalf of the Stayton Striders, I sincerely appreciate your support. Let’s make our 31st Great Strides a record year!