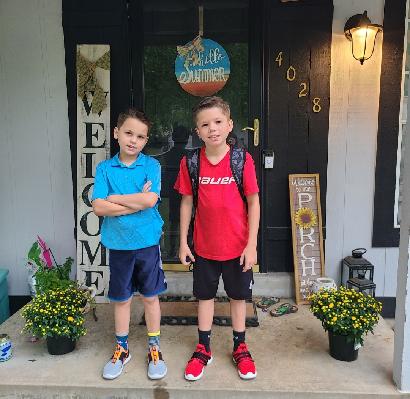 I was hoping my first pregnancy was going to be everything I hoped it would be. I went into my doctor's office for routine blood tests. I got the call while we were driving to Branson for our honeymoon that I tested positive for a carrier of Cystic Fibrosis and that my husband needed to be tested as soon as possible. Of course that dampened my excitement of our honeymoon. Neither one of us knew what CF was and how it was about to change our lives forever. Once we got home from our honeymoon my husband went to be tested. We found out he was also a carrier. They then referred us to a genetic counselor. We were scared and didn't know what to think. The Genetic counselor told us every horrible thing you could imagine. Your child will die early, they won't live a normal life, they won't be able to play sports or do anything physical. She told us we had a few weeks to decide what to do. (meaning get an abortion) She kept pushing us in that direction. We both didn't want that at all. So we did our own research. We switched doctors and went on with the pregnancy. Our sweet boy was born January 11th 2009. He was 4 weeks early. He seemed healthy and absolutely perfect. We kept him in my room, not in the nursery. They just asked that we kept track of his wet and dirty diapers on a chart. So we did. On day two we asked why he hasn't had a bowel movement yet. They said he has. We told them he hasn't because we've been changing all diapers. He was then rushed to St. Louis Children's hospital where he was in the NICU for meconium ileus. He had to have multiple enemas done to get him to have a bowel movement. They said he more than likely has Cystic Fibrosis. They tried doing a sweat test on him but couldn't get a good reading. He ended up only being in the NICU for a week. We got the call about a week after being home that the results from his newborn screening showed that he does have Cystic Fibrosis. It was a learning curve for sure. We learned so much from his pulmonologist. That he WOULD be able to play sports. And he WOULD live a normal life, but would just have to take medication and do treatments. We were so happy we didn't listen to that genetic counselor. He has been a pretty healthy boy. His weight and height have always been the biggest struggle with him. He started a growth hormone shot about two years ago and it is really helping him gain weight.

He's been on Trikafta for 2 yaers!!!!!!!   Cystic fibrosis is caused by a defective protein that results from mutations in the CFTR gene. While there are approximately 2,000 known mutations of the CFTR gene, the most common mutation is the F508del mutation.

Trikafta is a combination of three drugs that target the defective CFTR protein. It helps the protein made by the CFTR gene mutation function more effectively. Currently available therapies that target the defective protein are treatment options for some patients with cystic fibrosis, but many patients have mutations that are ineligible for treatment. Trikafta is the first approved treatment that is effective for cystic fibrosis patients 12 years and older with at least one F508del mutation, which affects 90% of the population with cystic fibrosis or roughly 27,000 people in the United States.
The efficacy of Trikafta in patients with cystic fibrosis aged 12 years and older was demonstrated in two trials. The first trial was a 24-week, randomized, double-blind, placebo-controlled trial in 403 patients who had an F508del mutation and a mutation on the second allele that results in either no CFTR protein or a CFTR protein that is not responsive to ivacaftor or tezacaftor/ivacaftor alone. The second trial was a four-week, randomized, double-blind, active-controlled trial in 107 patients who had two identical F508del mutations.
In each trial, the primary analysis looked at increases in the percent predicted forced expiratory volume in one second, known as ppFEV1, which is an established marker of cystic fibrosis lung disease progression. Trikafta increased the ppFEV1 in both trials. In the first trial, it increased mean ppFEV1 13.8% from baseline compared to placebo. In the second trial, it increased mean ppFEV1 10% from baseline compared to tezacaftor/ivacaftor. In the first trial, treatment with Trikafta also resulted in improvements in sweat chloride, number of pulmonary exacerbations (worsening respiratory symptoms and lung function), and body mass index (weight-to-height ratio) compared to placebo. He's almost 100 pounds and he couldn't be happier!!

He is a very active 13 year old who loves watching and playing hockey. Being outside as much as he can!

We decided to have another baby since the chance of having Cystic Fibrosis is a 25% chance. We felt those odds were pretty low. My second pregnancy i had to take progesterone shots so that he didn't come early like his brother did. They were concerned about the echogenic bowel that they saw on the ultrasound. My first had it also and we were told it was a sign of CF but it wasn't a 100% guarantee that he would have CF. He was born 3 weeks early on August 29th 2012. I had severe polyhydramnios. He swallowed a bunch of amniotic fluid and meconium when he came out. He wasn't breathing and they had to pump all of that out of his lungs. He was immediately rushed to St. Louis Children's hospital. He had duodenal atresia which was caused by the polyhydramnios. Part of his small intestine died in utero. He needed surgery when he was two days old to fix it. They cut out the dead part and sewed the two ends back together.  He was in the NICU for 6 weeks. It was the longest and worse 6 weeks of our lives. We were told our 2nd baby had Cystic Fibrosis. We thought what have we done to deserve this? In September 2013 he had another surgery. The scar tissue from the first surgery had caused a bowel blockage. It was then my husband told me he didn't want to have any more kids. I was heartbroken.  He is hospitalized atleast once a year due to constipation/blockages.

Jackson has been on Trikafta for about a year now and is growing like a weed! Luckily he hasn't needed any more surgeries. knock on wood. He is a very happy and energetic 9 year old who enjoys playing outside and being on the go.

We did have another baby! in 2017 we were blessed with a sweet baby girl! She DOES NOT have Cystic Fibrosis! She loves her brothers so much! and they have been a big help!

2020 was very different for sure. We have been extremely blessed that none of us have gotten COVID-19. I know 2020 was rough on everyone but we decided to make the most of it. We upgraded our pop-up camper to a travel trailer! We went camping almost every weekend and really enjoyed our family time! We are hoping to have many more years to come making camping memories! Jackson started the school year doing virtual learning. He is now back at school and doing great! Brendan became a big middle schooler this year so he wanted to get the full middle school experience so we let him go to school as normal. We only had one contact exposure scare. We are just extremely lucky that it was just a scare.

2021 was still rough with COVID-19 hanging around but we are still extremely blessed we never got it! Brendan is in 7th grade and Jackson is in 3rd grade!(he has the same 3rd grade teacher Brendan had) She shared her love of Harry Potter and both boys while in her class, became Harry Potter fans as well! They are both gaining and growing!! Couldn't ask for better health!

Please help so my boys can live long healthy lives and continue to play hockey, play outside, and be happy energetic boys!