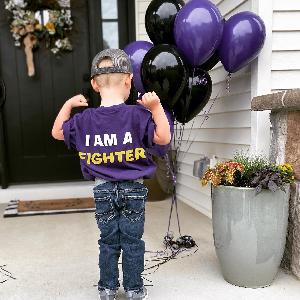 Our CF warriors are brothers Will and Wade!

William Robert Anderson was born January 28th, 2018. He was our healthy 6lb 15oz baby boy, and he appeared to be doing well in his first two weeks of life despite small struggles with weight gain. His sluggish weight gain was not extremely abnormal for his age, so we were not on high alert for a problem; therefore, we were completely shocked with the abnormal results of Will’s newborn screening. He presented with the two most common mutations for cystic fibrosis- two DeltaF508 genes. Will started pancreatic enzymes immediately to assist with milk absorption and weight gain. Will’s cystic fibrosis diagnosis was confirmed a few weeks after with the gold standard sweat test.

Will’s current treatments includes two thirty-minute chest physiotherapy (CPT) sessions and taking over 30 pills a day. We do our best to keep him healthy, gaining weight, and lungs clear. At this point in his life, Will knows he is a little different than others because he has cystic fibrosis. We tell him he is a champion and a CF warrior, and he beams with pride. We know the road ahead will not be necessarily easy for Will, but with God’s faithfulness and our wonderful community supporting him, there is nothing he can’t do.

We found out we were expecting our second baby in December 2020. This baby had a 25% chance of having CF just like Will. The advances in research in the CF community provided us with peace, no matter the outcome. Due to advances in genetic testing, we were able to find out that our baby had a very high probability of having CF early in the pregnancy through a maternal blood test. This allowed us to prepare our minds for what was ahead. On August 18th, 2021, our second sweet miracle, Wade Darren Anderson, was welcomed into the world.

Like his brother, Wade had little to no immediate signs of CF; however, since we had cared for a CF baby before, we knew, even before official genetic testing resulted, that Wade was a lot like his big brother. He tasted salty and his diapers were “different.” Thankfully for the advances, we were able to start CF treatment with Wade almost immediately. When his sweat test confirmed his diagnosis, we were not upset, we were just ready to give him the best life possible! Wade also takes medication before every feeding, and we perform manual chest physiotherapy (CPT) twice a day until he is big enough to get a vest like his brother.

Will and Wade were hand-picked to be brothers and God has already made it apparent in many facets of their life. One neat fact is their date of births (not planned) are connected. Will’s birthday (1.28.18) and Wade’s birthday (8.18.21) are mirror images of each other. We also like to say “where there is a Will, there is a Wade!”