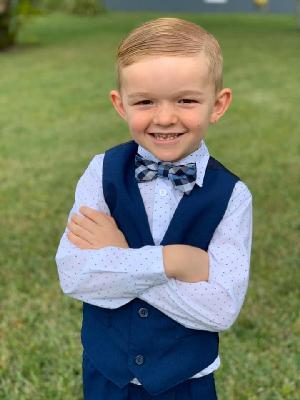 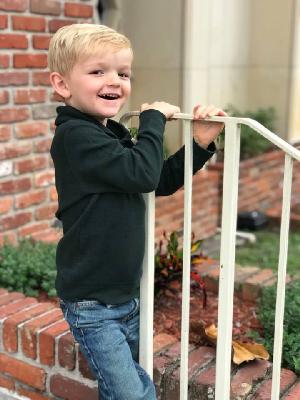 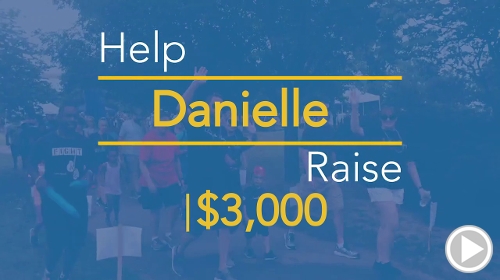 January 2020! This past year has been amazing! Jonah has not been in the hospital once! He is doing great in school! Only little hiccups in the road which have been controlled. Looking forward to another year of raising money for the foundation so that one day we have a cure!

This has been a great year for Jonah. He has stayed out of the hospital, hasnt had any severe sickness that couldnt easily be taken care of. Its been great! We want to raise money again this year for the Cystic Fibrosis Foundation. They have come out with more medications in 2018 that have been able to help a lot of kids and adult with this disease. Even close friends of mine have been able to get their children these medications which is great news. There is so much more to come in 2019. A large portion of the money we raise goes towards this research for new medications and one day a cure. If you can please donate to the link below. If you cant donate join us for our walk this year. We would love to have you!

This has probably been the best year since Jonah was born. He has made it a little over a year with no major complications and no hospital stays (this is amazing!) He started daycare again and has been doing very well. We hope his health continues on this path.

This past year was one of the toughest for our family. A week before the 2015 walk Jonah was admitted into the PICU (pediatric intensive care unit) with breathing issues related to CF (compounded by Rhino Virus and RSV). Jonah was released the day before the walk but my husband and oldest son had to attend the walk alone while I stayed behind to care for Jonah. This was the first of 3 hospitalizations, all directly related to cystic fibrosis. The next 2 happened in November of 2015 and January of 2016.

Each hospitalization Jonah had to stay overnight for about a week, being pumped full of antibiotics, steroids and breathing treatments all day long. He has been sick one way or another non-stop since November 2015, either with a runny/stuffy nose, a cough, or a fever.

Despite everything he has been through, he is still one of the happiest little boys on this planet. He is always smiling, laughing, playing and dancing. He has some pretty good dance moves for an 18 month old!

We hope this next year will bring less/none hospital visits and fewer antibiotic/steroid prescriptions. If you haven't read our post from last year we encourage you to do so! We will do our best to update this every year for as long as this site is up to keep those interested up-to-date on Jonah's condition.

Why is cystic fibrosis important to us?

In October 2011 we had a scare with our first son Jayden. His newborn screening came back showing a cystic fibrosis mutation. After further testing we were relieved that he was only a carrier (you need 2 mutations to have the disease). After doing research on the disease and how it affects people we made a commitment to ourselves that we would help raise awareness and donations to help find a cure and we have participated in this walk every year since then not because we needed to but because we wanted to.

Fast forward almost 3 years to our second son Jonah. We had extensive tests done during the pregnancy, including an amniocentesis, to assure us that he was happy and healthy. Everything came back positive, so we thought.

Jonah was born September 4th, 2014 and that is when our life was flipped upside down. His newborn screening showed a mutation which we knew about from the amniocentesis and we reassured the cystic fibrosis clinic that Jonah was only a carrier because we were assured of this through the amniocentesis. We were aggravated at having to do a sweat test (common test done to determine if CF is present) and even argued with the doctors. Let me tell you, we are MORE than thankful that they didn’t give up on us! After 2 positive sweat tests the doctors were sure Jonah had cystic fibrosis. But how?

This is where it gets confusing…

We knew James and I both had 1 mutation each.  Jonah had James’s mutation (predetermined through amniocentesis). My mutation that we knew about would’ve shown up in the amniocentesis if it were present in Jonah and therefore it wasn’t present. So how does Jonah have cystic fibrosis? The only clear explanation would be that either James or I also has cystic fibrosis. Being that he had James’s mutation and he gets one mutation from each parent, the only logical answer is that I too have cystic fibrosis. Completely confused, we had my blood and Jonah’s blood put up against the entire panel of mutations. What we found out was a complete shock! There was a 3rd mutation that has gone completely undetected through all of the extensive tests both before being pregnant with Jonah and even during my pregnancy. Our biggest fear has been confirmed, Jonah has cystic fibrosis. As if that wasn’t hard enough to deal with we were also informed that I have cystic fibrosis.

We are still too early in our doctors’ appointments to determine the severity of the disease in Jonah and me. The only positive as of right now is that I have gone almost 29 years completely undetected without any signs. I have my first doctor’s appointment February 6th, 2015 to determine how living with CF undetected has affected my current and future health. We are praying that the results of my health will give us the hope that Jonah could be just as mild.

Our goal is to not take the spotlight off of the children and families that have it worse than we do right now. While we are living with CF, we haven’t had to experience some of the horrific traits of CF and pray that we will never have to.

What does cystic fibrosis mean to us?

Cystic fibrosis means that Jonah has to have breathing treatments twice a day. He also has quarterly doctor’s appointments with the pulmonologist to track his progress. We have to make sure that anyone who wants to touch or hold him washes their hands to not pass on any germs because Jonah getting sick could cause his CF to spike and take a turn for the worst.

How you can help?

If you don’t know anything about the disease I encourage you to take 15 minutes and do a little research. I promise you will want to learn more and help! Don’t look at it as helping us and our situation. Look at it as helping anyone who has suffered, are suffering or will suffer in the future. Everyone with the disease needs your help, not just us. We ask that you donate, share our story and encourage anyone you know to donate to the cause even if it’s only $1.

Thank you for taking the time out of your day to read our story. If our story intrigues you then I encourage you to read stories of others with the disease to see truly how horrible this disease can be.