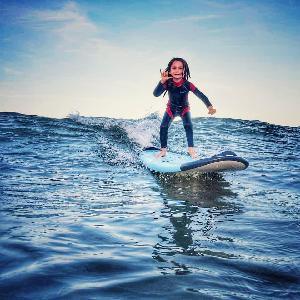 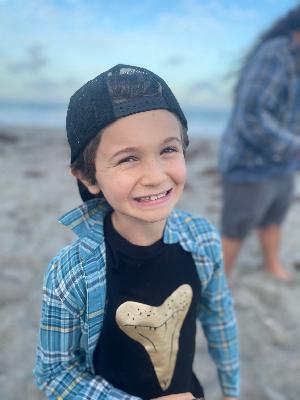 My name is Sharon Stokey and together with my amazing husband, Brandon, we raise Miles. Miles is our the WHY behind the Great Strides walk. Miles is absolutely perfect, you would never be able to tell he is living with a life-threatening disease. 13 days after Miles was born we received a phone call that would forever change our lives. 2 cystic fibrosis gene mutations appeared on the results of the state mandated heel prick test. The heel test screens for rare, but serious health conditions, including cystic fibrosis.

Cystic fibrosis (CF) is an inherited genetic disease that affects the lungs and digestive systems of about 30,000 American adults and children. CF is caused by a gene mutation that prevents salt from moving in and out of cells. For the majority of people, the salt in our bodies helps create loose water-like mucus that eventually gets expelled. For those living with CF, the mucus is thick and sticky because of the lack of salt absorption. For them, there is constantly a thick build up of mucus in their lungs and pancreas, as well as, other vital organs. The mucus in the lungs creates blockages that trap bacteria, cause infections, and makes it difficult to breath. While, the mucus in the pancreas prevents digestive enzymes from breaking down food and in turn prevents vital nutrients from being absorbed. Due to the destruction that CF creates within the body, many times people living with the disease need organ transplants.

At a CF convention I attended, a guest speaker used an analogy to describe the feeling you get when you hear that your baby has an incurable disease… He said, “It’s like your dream vacation to Hawaii gets rerouted to Baghdad and you are stuck there. You are constantly fighting to survive and thrive. For fear of the unknown is real.” He was right. Our highest point (bringing home a new baby) turned instantly into our lowest point.

Not knowing too much about the disease at the time, we thought we were going to lose him. Immediately, we took him to the CF center at Nemours Children Hospital in Orlando for a complete check-up. Once there, they told us we had to wait for Miles to weigh enough in order to conduct the definitive sweat test. The sweat test measures the concentration of salt in a persons sweat. People with CF have 2 to 5 times the normal amount of salt in their sweat. Six month later, Miles weighed enough and the results were in … Positive. So we did the only thing we could do; We became his advocates. We became his voice. We packed our lives up and moved from Central Florida to Tequesta so Miles could receive the pulmonary benefits of breathing in fresh salty air.

Everyday Miles does chest therapy using an airway clearance vest. The vest fills up with air and shakes him. This keeps the mucus on the move so bacteria doesn’t colonize and cause infections. We are so thankful that Miles is pancreatic sufficient and does not need to take enzymes to absorb nutrients. He is thriving.

We are so fortunate and thankful. This year Miles started a medication (Trikafta) for his specific gene mutation. Trikafta helps his cells produce the salt that his body needs to break down thick sticky mucus in his lungs and other vital organs. We are very happy to share that while on this twice daily medication, there’s been an improvement in his lung function! Yahooooo!

We know we are (he is) so blessed, but the fight is FAR from over. Trikafta is not a cure. It’s a bandage and a way to slow down the progression of the disease. Still, we know we are getting close. Close to finding the cure. We can feel it.

Though there are now fantastic medications on the market that can add decades to the lives of many people with CF... those medications are NOT cures and with over 2,000 different mutations, WE NEED YOUR HELP! Together we can make CF stand for cure found. Thank you to the family and friends who have spread awareness and fundraised to help our boy find his cure. We love you and are so grateful for your love, support, and encouragement.