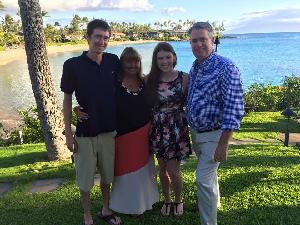 It is that time of year when we are asking for donations for the Cystic Fibrosis Foundation. Normally, you would be reading this from either John, Trudy, or even Shannon, but this year I, Thomas, wanted to take the time to update you on my life and the incredible need for support.

This past year has been the biggest roller coaster year of my life. I have had some incredible highs and quite literally the lowest of lows. I went from living as “normal” a life as possible, working in a sportsbook, to continuing to coach swimming, to going on vacations, to within a blink of an eye being mere hours from organ failure.

This past June, I had been battling incredible shortness of breath and felt that it was just my usual bout with pneumonia and if I went through another 3-week round of IV antibiotics, I would bounce back just fine; however, my body had other plans. The pneumonia had progressed beyond any point I had ever experienced and I finally agreed to go to the hospital. The walk from my couch to the car was so difficult that on the drive to the hospital, I could not breathe and had actually began to come to fact that I was about to die. Somehow, we made it to the hospital and I thought that I could finally relax because now I was going to get on some high-quality oxygen tanks and could allow the antibiotics to kick in. Unfortunately, this was only the beginning. The doctors told me I should be intubated because my heart was working so hard and my lungs were only spewing more carbon dioxide into my body. While I protested at first, it quickly became apparent that, while my body was working so hard, it was working too hard and would begin to shut down if it persisted any longer. Having doctors tell you that within several hours your body will go into organ failure is something I wish upon no one. Thankfully, I was only intubated for just over 48 hours before I was able to wake up and breathe on my own again. The battle back to recovery was long and difficult. I had to relearn how to do the simplest of tasks such as bathing myself, standing, walking, etc. My weight dropped to scary levels, even for me.

Only 2 short months after, a miracle happened. I was given an opportunity to have early access to Trikafta, which is a new drug aimed to help the underlying cause of Cystic Fibrosis. The drug study had promising results, but they were unsure how it would help someone like me with such an advanced progression of the disease. I have been on this drug for 6+ months now and I can honestly say that it has saved my life. I have had an increase in lung function back to levels that I have not had in almost 2 years. I have gained over 30 pounds since walking out of the hospital 9 months ago. I have been able to get back to living my life.

This, however, is not the end. I went for an evaluation for a lung transplant this winter, and while I am currently healthy enough to not need it, it is coming. When? We don’t know. But as amazing as Trikafta has been, it cannot reverse the damage that is already there and I will need to have the transplant at some point.

That is where you come in. The Cystic Fibrosis Foundation has been working tirelessly to help those suffering with CF as they transition into transplant. There have been tremendous improvements in the success rates, but more needs to be done. It is still the most risking transplant organ and when I need to go for transplant, I want my odds of success to be as high as possible.

I can’t thank you enough for your continued support and I am hoping you can continue to donate to help me and everyone else suffering with this disease.