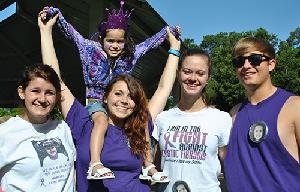 Walking with Weston was founded in 2006, 6 weeks after our little boy, Weston, was diagnosed with Cystic Fibrosis. He was born in October of 2005 missing part of his small intestine. After 2 surgeries, and months in the hospital, the diagnosis was a shock. We had hoped that his problems were "fixable", and learning that we were faced with a disease that didn't have a cure and that was progressive was devestating.

I instantly needed to find some control over the disease that attacked my baby boy, so 2 days after his diagnosis was the first time I contacted the CF Foundation and created a team. Our team name is simple, but the meaning is that we will not let him fight this alone. We will do whatever we can to make sure he has the best chance of having a happy, healthy life.

In the beginning, Weston struggled with digestive problems. He has since gone on to have multiple sinus surgeries. We have been lucky so far that his lungs have not cultured any of the nasty bacterias that are hard to fight off. He also hasn't had any long hospital stays since he was a toddler. This year he is playing baseball for the first time and loving it! Life with CF is not easy. He does over an hour in treatments daily, but it doesn't stop him from being a regular kid.

Fundraising gives us hope for his future. We are so blessed to be surrounded by such caring, compassionate, and generous people. Please help us in our quest to cure this awful disease!