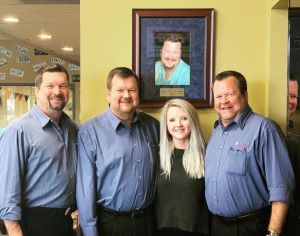 February 1993 will always be the month that not only Caitlyn’s life changed but her family’s lives changed as well. One month after she was born, her parents received the news that their little girl tested positive for Cystic Fibrosis (CF), A very rare incurable genetic disease that primarily affects the respiratory & digestive systems and tragically shortens people’s life expectancies dramatically. This diagnosis was painful, but it brought both sides of the family together and created a force to be reckoned with in the fight against CF. From 1995 to 2002 the Pridemore family was known as Caitlyn’s Crew. They held car washes, golf tournaments, and many other fundraisers through the year to raise money as well as awareness for this incurable disease; and every May they walked as a team in their matching T-shirts and paved the way for dozens of other teams to come after them and join in on the same fight.

By 2003 Caitlyn personally wanted to step away and start to put her efforts in other avenues. Rather than fundraising and the walk-a-thon she wanted to help the fight against CF by participating in research trials and therapies. She allowed herself to be poked, prodded, and tested on for over ten years while she took part in countless trails that helped develop new treatments & new medications. Those years were both exciting as well as tasking to any young teenager/adult.

After taking sometime away in order to grow up, enjoy life, and be her own person, Caitlyn and her family decided it was time to come back and fight the good fight. Caitlyn’s Crew has now transformed into Caitlyn’s Pride. A new name represents a new chapter, a new team, and the prosperous adulthood Caitlyn has begun to build for herself.

Please join Caitlyn and her family on their first year back to the Great Strides fold by helping her raise both awareness and money in the fight for a cure against CF.

One day CF will stand for CURE FOUND.