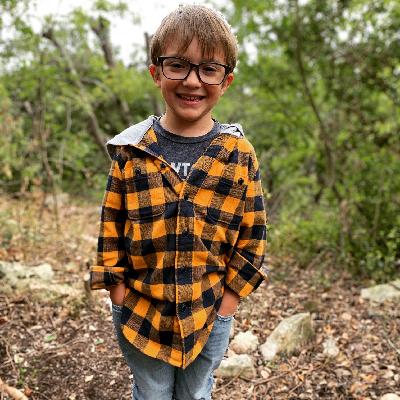 Help us find a cure for our sweet boy!

Help us find a cure for our sweet boy!

Meet Cooper! He is a lively, funny, active six year old. He loves art, TaeKwonDo, school, any sort of celebration, and can out-talk just about anyone. Cooper was also born with Cystic Fibrosis. We found out through prenatal screening that my husband and I are both carriers of CF mutations, making the odds of our son having CF 1 in 4. Through further testing, we learned when I was 16 weeks pregnant that he does, in fact, carry one copy of each of our mutations. That was one of the scariest moments of our lives. We made the mistake of googling and it broke our hearts to read that the average life expectancy of someone with Cystic Fibrosis at the time was 38. Soon after we met with a genetic counselor and our local CF team who put our minds at ease that the mutations he has could be a mild case, but there are no guarantees with CF. We were also told of some exciting developments in CF research that could (hopefully) result in a huge jump in the health of people with CF around the world. In just the short time that we have been part of the CF community, the life expectancy has jumped into the 40's!

We have been so lucky with how well Cooper has done since he was born. We attribute a large part of his success over the last several years to progress in treatment, research, and a proactive approach from his pulmonologists, nurses, respiratory techs, dietitians, and GI specialists (he meets with all of these wonderful members of his care team every visit)! Each day he starts his morning with about an hour of nebulized meds and chest physiotherapy (he wears a vest that inflates and shakes the different lobes of the lungs to loosen up sticky mucus and make it easier to cough out). Every evening he does the same. When he is sick, he does 3-4 of these treatments. He is a patient little man!

This past few years have been a CF rollercoaster for us. Since we have been so fortunate with how healthy he has been thus far, it was quite a blow when we discovered in November of 2017 that he had a partially collapsed lung. He had a small cold earlier in the month but nothing led us (or his doctors) to believe there was something that severe going on. We were fortunate that he happened to have his annual x-rays at his CF clinic appointment (we go every three months), otherwise, we would not have known until symptoms were present. Unfortunately with CF, often by the time symptoms show there is irreversible damage done. Luckily, we upped his treatments to three times a day (which meant pulling him from school each day for treatments, bringing them along to play dates, etc), and in two months follow up x-rays showed the collapse had cleared! His lungs still show "disease progression", which is so scary to hear as a parent, but we keep our level heads on and remind ourselves that this is part of the disease and we do everything we can to combat that every single day.

In May of 2017, a drug called Kalydeco was approved for Cooper's mutations. After a two month battle with insurance (it's about $30,000 a month-seriously-so as you can imagine they didn't want to cover it) he began taking it in July of 2017! We are so thankful for the research that has gone into developing these medications that are helping extend our son's life, and give him as normal of a childhood as we can.

The CFF (Cystic Fibrosis Foundation) gets no government funding, so we rely on private donations to make the real progress in research to help find a cure for Cooper and all of those worldwide fighting CF every day.

Real progress has been made in the search for a cure, but the lives of people with CF are still cut far too short. By walking today, I am helping add tomorrows to the lives of people living with cystic fibrosis. Will you join me? Support me by making a donation to my Great Strides fundraising campaign today!

Help me reach my fundraising goal by donating to my Great Strides fundraising campaign. Your gift will help add tomorrows to the lives of people with cystic fibrosis by supporting life-saving research and medical progress. Your gift is 100-percent tax deductible.
There are approximately 30,000 Americans living with cystic fibrosis. They are moms, dads, sisters, brothers, daughters, sons, friends and co-workers who struggle every day just to breathe. I walk for them and hope you will support me in my efforts.