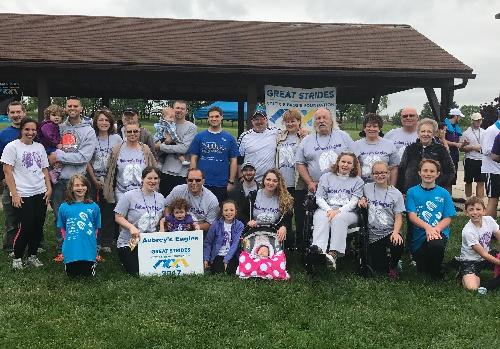 Welcome to Aubrey’s Eagles! This is our third annual walk to support Aubrey and others with Cystic Fibrosis. Last year (2017) we had 31 Team members and raised $3,848, this year our goal is to exceed those numbers!

As you may know, Aubrey was diagnosed with Cystic Fibrosis (CF) on November 14th 2014, one week after she was born which was a complete shock to Brittany and I. We didn’t have a clue what Cystic Fibrosis was, but hearing that your daughter has a chronic life-threatening disease, was devastating. On top of being first time parents and learning to care for a child, we knew that what we thought was going to be normal was about to change. The one thing I did know is that we were going to do everything in our power to keep her healthy and try to make her life as normal as possible. We would not be able to do it without the support we receive from our family and friends, and for that we thank you!

If you are not familiar with Cystic Fibrosis, CF is a genetic, chronic, life-threatening disease that affects approximately 30,000 Americans, and 70,000 people worldwide. Aubrey has the most common mutation of CF which is homozygous DF508 which primarily causes difficulty breathing due to the excess mucus in the lungs; this excess mucus also tends to lead to more lung infections due to the bacteria buildup. The CF also causes pancreatic insufiency where her pancreas has difficulty breaking down the food that she eats. More recently she has also had some gastrointestinal issues which are causing her to not gain weight as she should.

Currently there is no cure for CF, however the Cystic Fibrosis Foundation is tirelessly working on a cure, as well as working on better methods to help increase the quality of life. The Cystic Fibrosis Foundation was founded in 1955, and what sets it apart from most other foundations is it does not receive any funding from the government for research like many of the larger foundations, all of its funding comes from private donors. To give an insight on how far the CFF has come; as of 2015 the median predicted survival age is close to 40, which is a dramatic increase from the 1950’s where a child was lucky to make it to the age of 1. Regardless 40 years is still way too young, and unacceptable. In 2015 the FDA approved a combination drug for Aubrey’s specific mutation that is suppose to treat the root cause of CF; a defective protein which is known as CFTR.

To anyone that has been lucky enough to spend time with Aubrey, knows that she is truly an inspiration to be around, she fights this disease everyday as if nothing was wrong, she is usually always smiling or laughing even if she is sick. Every day I wish that I could switch places with her, but I know that is unrealistic. What we can do though is advocate for her and help fund additional research which will find a cure.

If you could please find it in your heart to donate, Aubrey, the other 70,000 CF patients, and their families would greatly appreciate it. Your donation is fully tax deductable. If you are not able to donate, but would like to help support the cause, you are more than welcome to join our team!