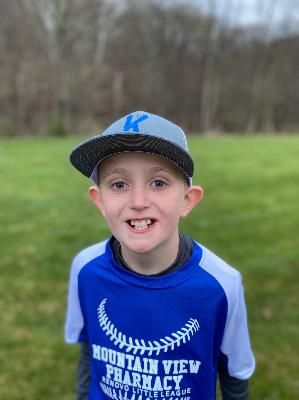 "Hi folks! We all know why we're here, and as much as I hate the fact that Kahner has this chronic disease, I will not let it get the best of him! Kahner was diagnosed on October 25th 2012, just 22 days after he was born. At 23 weeks pregnant at a routine ultrasound appointment, doctors found what they called "echogenic bowel." To make this long story shorter, Kahner was rushed to GMC due to no bowel movement in the first 24 hours and an increasingly large abdomen. So, at 2 days old he had his first surgery. Unsure of what they would find, the surgeon didn't leave us with much hope that Kahner would survive. Kahner had a volvulus (his bowel had made a knot of itself, and the knot part had died). 8 inches of his small intestine was removed. On November 6th, 2012, Kahner had his second surgery to reconnect the bowel that they had cut in two and had made a jejunostomy with. It was a success! We spent 7 weeks in the NICU, and on November 21st, Kahner came home for the first time!- This all was due to Kahner's CF and the thick secretions that plugged up Kahner's intestines, making it impossible for Kahner to have a bowel movement. It's already been quite a journey for us! And although at times we will struggle, we will get through anything we have to. There is no other option. We will win this battle!

We are fighting and will continue to fight for Kahner's life everyday, and this walk is one way of doing my part in the fight to cure Cystic Fibrosis! Come walk with us, and support our beautiful baby boy Kahner. The support of our family and friends would mean the world to all of us! This will be our second year doing the Great Strides walk in Lock Haven, and we're excited to see the impact we'll have in 2015!"- Amber