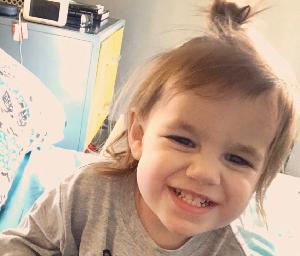 Riley's story has certainly not been a simple one. At exactly one week old we received a call that her newborn screen was abnormal and she needed additional testing to determine if she had CF. We were absolutely blindsided by this and had no clue what to expect.

Since then, Riley has undergone countless doctor appointments, medical tests, blood draws, medications, x-rays, etc. All of this has left us nearly as in the dark as we were initially. Riley carries the most common CF mutation, d508, as well as mutations of "unknown significance." Her sweat chloride tests have all fallen in the intermediate range, so no true diagnosis of CF can be given.

Despite that, Riley struggles daily with illness, pain / discomfort, medications, etc. Although she doesn't have a true CF diagnosis, she is more than just a carrier of CF and it complicates her every day life.

Whether her diagnosis remains as CRMS or changes to CF, we stand behind the fight for a cure!

Help us support the fight for a cure for CF - for Riley and every other person impacted by this life altering disease.

Riley's roar is strong, but with your support it is even stronger.