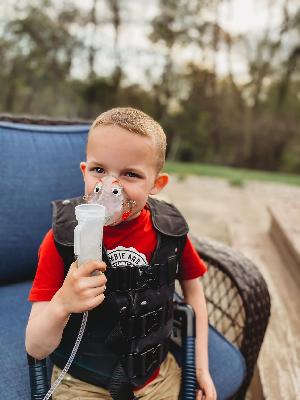 Conlee was born with Cystic Fibrosis (CF), a chronic, life-shortening disease that affects many parts of the body such as the lungs, sinuses, and digestive system. He was diagnosed at 2 weeks of age to our complete surprise. We spent the first 2.5 years of his life struggling to help him eat more and gain weight since he needs at least twice the amount of calories as his healthy friends. He was only getting about 1/2 the nutrition that he needed at this time and was vomiting multiple times a day. We were so stressed and worried for him so we decided to have a feeding tube placed in September 2017 which helped tremendously. He was finally thriving and growing and there was no more stress when it came to meals. He was still getting sick though and had such a negative view of food. At the age of (almost) 7, he is finally learning to enjoy food and not looking at eating as a bad thing.

In July of last year, a new medicine for Conlee's CF mutations got approved for ages 6-11 years.  This medicine is called Trikafta and it is able to treat the underlying cause of CF jrather than treating the symptoms which basically means it helps to thin the thick mucus in his body which helps makes his body function much better. It helps his sinuses, lungs, and even his digestive tract work better! He still has CF though which means he still has to take over 30 pills a day and spend 1.5-2.5 hours a day doing chest therapy and aerosol treatments to make sure his lungs stay clear.

Before Trikafta, Conlee had undergone about 10 surgeries. We are extremely hopeful that he will not need to undergo many surgeries moving forward thanks to this groundbreaking medication. The problem is that although this medicine is an AMAZING stepping stone for the CF community, there are still many patients who are not able to take this medication because it does not work on their CF-causing mutations. So we will not stop this fight until everyone has a medication to help them and ultimately, one day, a cure so that nobody else has to go through all of this!

Please consider donating to our fundraiser this year to help us make CF stand for CURE FOUND!!