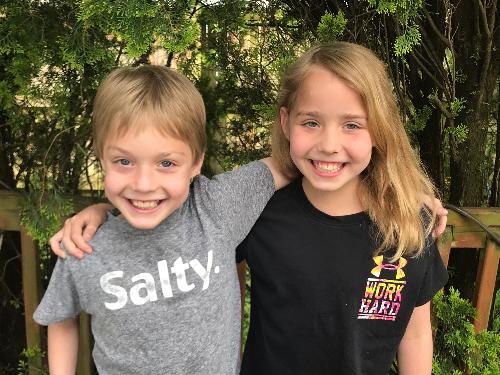 This year's Great Strides walk will be our 9th as a team! What a crazy ride these past nine years have been. From discovering we were having twins, to finding out they both had cystic fibrosis, to thinking our world was ending, and then slowing adjusting to our new normal and figuring out how to make it all work.

Part of our normal is visiting Mallory and Camden's pulmonologist, Dr. Chaney, every other month. During these appointments, Mallory and Camden's growth is checked, they do pulmonary function tests (PFTs) to see how well their lungs are working and get throat cultures. We celebrate small victories, such as a pound gained or an inch grown, and big ones - increases in lung function and clear throat cultures. After the October appointment, the news wasn't so great. Mallory's culture came back positive for pseudomonas, a scary bacteria that wouldn't affect you or me but can destroy the lungs of someone with CF. On one hand, the news was a bit of a relief because it meant we finally might have a reason why Mallory had been so sick the past year. On the other hand, this new diagnosis meant an immediate inpatient hospital stay for IV antibiotics, followed by more IV antibiotics at home and then inhaled antibiotics. Since October, Mallory's lung function has improved to over 100%, which is the highest it has been in a year. That's huge because it means that Mallory can now run around with her friends without being out of breath and sleep through the night without coughing so hard she wakes herself up.

But we're not in the clear yet. Despite all of these incredible improvements, Mallory cultured pseudomonas again in April. This time we tried strong oral antibiotics along with the inhaled antibiotics but the pseudomonas was still in her lungs when we went back in May. She is currently doing another round of the oral antibiotics and continuing the inhaled ones which will now be long term. As long as she stays asymptomatic, it means we are at least keeping the pseudomonas at bay. If she becomes symptomatic (intense coughing or drop in lung function), that will earn her an immediate hospital admission for IVs. Right now, we keep fighting with antibiotics and hope that's enough.

Camden has had a pretty good year health-wise (other than a trampoline incident which resulted in two staples in his head!). His lung function has been in the 90s and 100s, and you could never tell that he has CF from watching him juke on the football and lacrosse fields. The main concern with him right now is weight gain and growth. He hasn't really grown much in the past year, and Dr. Chaney thinks he needs a g-tube (to match his sister). Height/weight is really an important measurement for kids with CF because it has been shown to correlate with future lung function. The higher Camden's BMI is now, the higher his lung function is likely to be in the future. There are no definitive plans yet, but he will likely be getting a g-tube soon.

All in all, it's been a fairly good year but CF is such an unpredictable disease that we never know what's coming next and always have to be ready to fight what it does come. Only 5% of CF patients are over the age of 40. Those aren't great odds, but the CF Foundation gives us hope in the form of drug research and development that is made possible by all of you.

Keep fighting with us.

Walk with Twin Triumph on Saturday, June 1 at Navy Stadium in Annapolis.

Registration is at 10am, and the walk starts at 11am. It's a fun, family-friendly morning with a short walk - .6 miles around the stadium, and everyone is invited! All donations go directly to the CF Foundation to fund research and patient programs.

This year we walk in honor of Aunt Sally, who was always one of our biggest supporters. She is missed every day but will be especially missed on our walk day.

As always, thank you for your love and support! See you in orange in June!

P.S. We're getting a late start this year, but please let me know ASAP if you want a Twin Triumph shirt. Look out for a tee shirt redesign next summer to celebrate ten years (color will still be orange of course!).