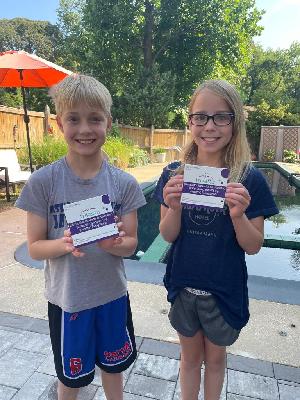 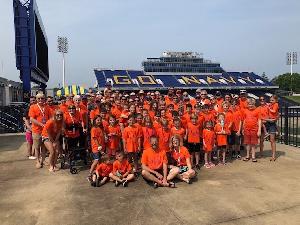 After two years of being virtual, the Great Strides walk is back in-person this year on June 4 in Annapolis! It will be our 10th year participating. Mallory and Camden were only 6 months old during our first walk, and now they are 11, in their last year of elementary school and ready for middle school in the fall.

The last couple of years have been really good for Mallory and Camden health wise. It's the first time since they've been born that we've gone two straight years without a single hospital admission for either one of them. The pandemic helped as they just weren't exposed to a lot of viruses and germs. As a CF family, we were well prepared - constant hand washing and sanitizing has always been part of our daily routine. And Mallory and Camden were no strangers to wearing masks. They had a lot of practice during countless hospital stays and doctor's office visits.

But the biggest news is TRIKAFTA! This is a miracle drug that we have been waiting for a long time. It was finally approved last summer for ages 6-11, and Mallory and Camden took their first dose on July 16. Trikafta is a modulator drug which works to correct the underlying defect in their bodies. People with CF have defects in the CFTR protein where chloride ions cannot move sodium and water in and out of cells as they should causing thick, sticky mucus to build up in the lungs, pancreas and other organs. Trikafta works by helping the CFTR proteins function more effectively.

So far, Trikafta has lead to Mallory and Camden being able to gain weight better, something that has always been a struggle for them and is really important in kids with CF because higher BMIs as a child correlate to higher lung function as an adult. Mallory's weight gain has been so impressive that her pulmonologist said she could take out her g-tube (which was used for overnight supplemental feeds/calories). The tube came out last week and after nine years, Mallory was more than ready to say goodbye. Trikafta has also kept their lung functions up and kept them out of the hospital.

Thanks to your incredible support throughout the years, Trikafta has become a reality for Mallory and Camden and so many others with CF. While it's been very promising so far and gives us a lot of hope for the future, it's still not a cure and won't allow Mallory and Camden to live a life free of CF just yet. They still have to do 40 minute breathing treatments twice a day every day to keep their lungs clear and take 20+ pills each day so their bodies can absorb the nutrients from the food they eat. Colds still hit them really hard and usually mean a couple of days home and a lot of coughing.

With your support, we know that day will come, the day when Mallory and Camden can say that CF was something they used to have. Walk with Twin Triumph on June 4, donate to our team and help us make CF stand for Cure Found. Thank you all for your support always. It means more to our family than we can say.

*This year's walk will once again be held at Navy Stadium in Annapolis. It's a very family friendly morning with a short walk around the stadium and lots of free food, drinks and fun. It's always my kids' favorite day of the year. And Mallory and Camden love to have their friends there!