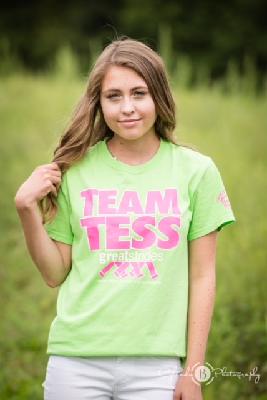 I’ve been sending these letters asking for your support for our Great Strides Team Tess for years, but this one has been the hardest to write. CF has made this the toughest year that Tess and our family have had to endure.

Tess endured several hospitalizations this year, but in August she went off to college at Brockport with a nursing intent major. I can’t even describe the mixed emotions that Mike and I were feeling. We were so proud of her going off to pursue her dream but terrified at the same time of what college life would mean for her health.

Unfortunately, her health did decline in December and infections caused her lung function to dip to a low 24%. She spent two weeks in the hospital hooked up to four different IV medications 24/7. This is terrifying because she has become resistant to many antibiotics and we never know how her lung function will rebound or what side-effects will occur. The antibiotics caused such nausea that she was unable to eat, or even smell food, and ended up having to do IV nutrition because she was clinically starving. I wouldn’t wish the pain of watching your child go through something like this on my worst enemy.

It was at this time that we had to face one of our greatest fears, as her doctor recommended that she get a double lung transplant consultation. We spent her winter break in Pittsburgh going through a rigorous medical and emotional evaluation. It was determined that she was not quite ready to be “listed” for a transplant at that time, but it is a constant worry because her health can decline more at any time. Her doctor has been working closely with us to try and figure out how to make sure she could be strong enough to endure a transplant. To even qualify for a transplant, she must gain weight and try and get rid of some pretty resistant bacteria, so it does not grow in the new lungs. It’s scary to face the thought of trading one disease for another, because a transplant means a life of anti-rejection medications and a host of other potential issues. It is terrifying where our minds go. A few weeks ago, the doctors sent us back to Pittsburgh because she was declining again, and they are coming up with a plan to try and fight the bacteria that won’t back down. The plan is that within the next few weeks, they need Tess to stay in the hospital for more antibiotics. A strong regimen that will need to monitored in-patient for a few weeks. Not a great way to start of summer break, but she knows it needs to get done.

While most 18-year olds are worrying about finals and what party they’ll be going to this weekend, Tess has to carefully plan her days around treatments. She takes 5 nebulizers and wears a vibrating vest two times a day for an hour each time. She takes dozens of pills in the morning and evenings, and schedules her days around IV medications, where she is literally hooked up to an IV pole in her room. At times, she even needs oxygen to help her catch her breath.

Balancing health, school social life and school has been a challenge. Tess described it best when she recently gave a speech to a local Delta Phi Epsilon chapter:

“I often get discouraged considering that I work so hard, every day, but I am still unhealthy. Or that sometimes I wish I was able to go out with my friends on the weekend and not be confined to my room, hooked up to an IV. I wish that I could walk to class without having to take breaks to catch my breath. I wish I didn’t have to take so many medications. I wish I could breathe, and I wish there was a cure. But I know a cure is possible.”
Tess is strong and she is fighting. We are all fighting. Physically and emotionally. There is a drug that is currently in Phase 3 trials that we are hopeful will help Tess’s lung function improve, but it’s a race against the clock. Your support over the years has helped drugs like this become a reality and we are so grateful for you.

We again ask that you please follow the link to join Team Tess and consider a donation to the Cystic Fibrosis Foundation through Team Tess page: http://fightcf.cff.org/goto/TeamTessSyracuss2019