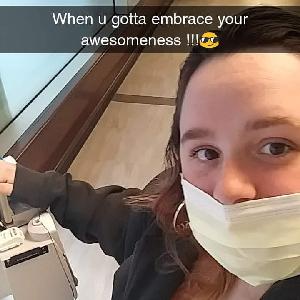 Join our team CF sweethearts and help us get one step closer to a cure for cystic fibrosis!

For too long, cystic fibrosis was known as a rare, genetic disease, that has roobed us Cystic fibrosis patents  of tomorrows. Alot of lives has been lost and alot of joureny's have ended in the past however because of the research and the people that are gone there memory has lived on and inspired so many live including mine as for I might be 23 years old with a deadly and dangerous Illness how ever i don't let it defined me or who i want to be instead I live on telling the stories about how there was time were I thought that when i was 2 months,10 , and even 18 years and that would be my last breath however I never stop fighting because giving up was not and will not ever be an opioion for US we stand tall united so That CF means Cure Found and that purple isn't just another color in the rainbow but with inspiration never ever giving up hope and to never stop fighting no matter what.There was even a time were i thought i would never have an opportunity to be in college or teach in sunday school even though that I have an Illnes I don't let it take away from my dreams and what i love doing no matter what. There are approximately 30,000 Americans living with CF. They are moms, dads, sisters, brothers, daughters, sons, friends, and co-workers who struggle every day in the face of this devasting disease. We walk in Great Strides for them.